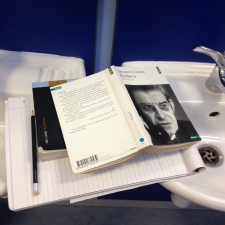 A Centre for Research in Modern European Philosophy (CRMEP) workshop in collaboration with Departments of Psychosocial Studies and Law at Birkbeck College, University of London.

Lisa Baraitser is Reader in Psychosocial Studies at Birkbeck, University of London and a psychotherapist in independent practice. She is the co-founder of MaMSIE (Mapping Maternal Subjectivities, Identities and Ethics), an international research network on motherhood and the maternal, and co-editor of the journals Studies in the Maternal and Studies in Gender and Sexuality.  Her research has centred on figurations and representations of the maternal in psychic and social life, working at the interface between psychoanalysis, feminist theory, and philosophies of ethics, affect, materiality, temporality and event. She is the author of Maternal Encounters: The Ethics of Interruption (Routledge, 2009), winner of the Feminist and Women's Studies 2009 book prize for outstanding feminist scholarship, and a forthcoming co-edited collection, A Feeling for Things: Conversations in and around the work of Jane Bennett (Punctum, 2014) with Michael O'Rourke. Her current work is on time, tracking forms of affective sociality that persist under neoliberal conditions through forms of 'suspended' temporalities.

Philippe Van Haute is Professor of Philosophical Anthropology at Radboud University Nijmegen and a practicing psychoanalyst of the Belgian School of Psychoanalysis, of which he was president from 2006-2009. He has been a Fellow of the Stellenbosch Institute for Advanced Study since 2010. His research focuses on the relation between psychoanalysis and philosophy and more particularly on the importance and significance Freudian thinking (and psychoanalytic thinking at large) for a contemporary philosophical anthropology. He is a founding member of the Symposium Phaenomenologicum that convenes every year in Perugia (Italy), of the Freud Research Group (www.psycho-analyse.be) and of the Société Internationale de Psychanalyse et de Philosophie/International Society for Psychoanalysis and Philosophy (www.sipp-ispp.org). He edits a series on 'Figures of the Unconscious' at Louvain University Press. His books include: (with Tomas Geyskens) Towards a Non-oedipal Psychoanalysis? Clinical Anthropology of Hysteria in Freud and Lacan (Louvain University Press, 2012); (with Tomas Geyskens) From Death Drive to Attachment Theory (Other Press, 2007); (with Tomas Geyskens) Confusion  of Tongues. The Primacy of Sexuality in Freud, Ferenczi and Laplanche (Other Press, New York, 2004); and Against Adaptation (Other Press, 2002).

Stella Sandford is Associate Professor in Modern European Philosophy at the Centre for Research in Modern European Philosophy, Kingston University. Her research centres around issues in the philosophy of sex and gender and on the relations between philosophy and feminist theory and psychoanalytical theory. She is the author of Plato and Sex (Polity, 2010), How to Read Beauvoir (Granta/Norton, 2006) and The Metaphysics of Love: Gender and Transcendence in Levinas (Athlone/Continuum, 2000) and co-editor (with Mandy Merck) of Further Adventures of the Dialectic of Sex: Critical Essays on Shulamith Firestone (Palgrave Macmillan, 2010). She has recently collaborated with Étienne Balibar on an English edition of his Identité et différence (Identity and Difference: John Locke and the Invention of Consciousness, Verso 2013), and has been working with colleagues at CRMEP on a project on transdisciplinarity. She is a long-standing member of the Radical Philosophy editorial collective.