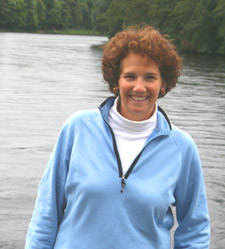 High flying financier Cristin Luttazi had a successful career working in stock markets around the world. But a series of traumatic events made her rethink her life and she decided to pursue her passion for marine and freshwater biology by studying for an undergraduate degree at Kingston University.

Now in her second year, Cristin's dedication and enthusiasm to the subject have been rewarded with a prestigious three-month fellowship to one of the world's leading marine science research centres, Woods Hole Oceanographic Institution on Cape Cod on the north-east coast of the United States. Cristin, 41, beat off competition from hundreds of international and US students to secure the fellowship, which will allow her to pursue her own research project with help from the centre's scientists and state of the art facilities. "I'm so excited; I haven't stopped smiling since I was told I received the fellowship. To put this on your resume is the pinnacle, this opens many doors," Cristin said.

Following a first degree in finance and marketing at college in Massachusetts, Cristin worked in Boston, San Francisco, Singapore and Sydney, and most recently London, for Barclays Global Investors. But two big events inspired her move from finance to fish - she broke her back in a boating accident and had to spend many months recuperating, and several years later her older sister Tracy was told she had a brain aneurism.

"I had a lot of time to think when I was in hospital; I knew I didn't want to go back into finance but I did. "I had a second chance to think when I found out about my sister's aneurism during a long-haul flight; by the time I landed I knew I had to change direction. You don't often get the chance to make big changes in life - I had two chances; I would have been foolish not to take the opportunity the second time around."

Her sister's illness brought Cristin back to her childhood home of Cape Cod. She had always been fascinated by the local landscape; a peninsula battered by the North Atlantic, and was convinced marine biology was her new vocation after she joined the local civic society. "I began to realise that many of the decisions being made, from ferry services to septic systems, were connected to the environment, which few people had any really knowledge of. I decided to study marine biology so I could help people make informed choices."

Cristin, who lives with her husband Daniel on the Isle of Dogs in south east London, said studying science had been tough. "I'd never seen a periodic table before and was studying biochemistry without ever taking chemistry at school, so I've had to work really hard to make the grade." After she graduates, Cristin is hoping to continue her studies with a doctorate in ocean biology with a focus on ocean acidification - changes in the world's seas as a result of burning fossil fuels.

To win the fellowship at Woods Hole, Cristin had to prove she had high academic grades, provide five references and write a series of essays. Fewer than eight per cent of applicants are successful. After the programme she will have to write up and present a research project. As well as the academic benefits, the fellowship will also allow Cristin to see more of her family, including her sister, who has now recovered.

Dr Tony Walker of the School of Life Sciences said: "This is a wonderful opportunity for Cristin to study at an internationally renowned institution. She's a dedicated student, one of the best I've taught. "Her maturity, drive and powers of inquiry make her an inspiration to her fellow students."