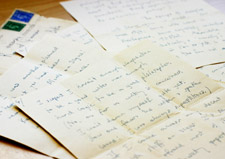 Iris Murdoch's troubled private life and insecurities about her ability as a writer are laid bare in a previously unpublished set of letters to the French poet and novelist Raymond Queneau. The letters were recently bought by Kingston University in South West London and are now open for public inspection for the first time.

Most of the 160 plus items of correspondence were written when Murdoch was in her late twenties and early thirties - before her first novel was published and before she married. The novelist was a prolific letter writer and the Queneau collection is significant because it creates an intimate portrait of her development as a writer, philosopher and as a woman, and describes her feelings of despair over a string of complicated love affairs and her professional capabilities. At one stage she says she felt so low she wondered whether she was in need of psychoanalysis.

The letters were purchased at a cost of £50,000 through a series of grants and donations including £25,000 from a Victoria and Albert Museum fund and £7,500 from the National Heritage Memorial Fund (NHMF). The NHMF acted as the last resort to enable the University to buy the letters, which may otherwise have been lost or sold abroad. 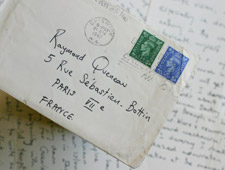 Dr Anne Rowe, Director of Kingston University's Centre for Iris Murdoch Studies, said that in early letters the author was flirtatious and seductive, exerting a sexual allure to secure Queneau's interest. "She appeals to what she perceives as his masculine desire to play the strong man to a woman who needs saving. She wanted him to be a master and was prepared to go to any lengths to enslave him," she said.

"Later when he does not write back, she is very sharp with him and there is a sense that she is using her power as an attractive woman to manipulate. I was surprised by her psychological fragility and that she is so desperate to be a writer that she would use all means at her disposal to achieve that."

Although Murdoch loved Queneau with a passion, Professor Peter Conradi, the author's official biographer, stressed that the relationship was never physical. Queneau was married and did not appear to share Murdoch's intense feelings. Their relationship was conducted primarily through letters and the couple met face to face on only a few occasions. "It was as a mentor that she chiefly valued him," Professor Conradi said.

Dr Rowe said Murdoch dramatised her relationship with Queneau, as she did with other men, and later used those experiences in her novels. "She intensifies emotions for people she has barely met, creating tensions that she is going to pillage for her art later on."  She added: "The unprecedented insight into her inner life allowed in these letters will inform any future biography or research into how a writer's life is transformed into art." Professor Conradi described the letters as "an electrifying run which will immeasurably enrich Kingston's archive". 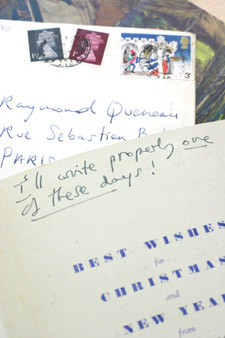 Murdoch herself recognised the importance of her correspondence with Queneau, telling him: "Anything I shall ever write will owe so much, so much, to you". Her letters to him spanned almost thirty years, although her dependence on him appears to have ended in 1956 when she met and married John Bayley.

The 164 hand-written letters, notes, cards and telegrams, some in French, were sent between 1946, when Murdoch worked at UN refugee camps in mainland Europe, and 1975, when she was an established author. She reveals details of her unpublished early novels, which have since been lost, expresses her views on God, literature and philosophy and talks about her everyday life, loves, studies at Cambridge University and work as a philosophy tutor at Oxford University. She reveals her intense dislike for some of the philosophers she encounters at Cambridge in 1946-47, feeling herself to be a "dreadful obscurantist" among "bright young men...who are busy being very lucid and smart".

Her hand-writing varies dramatically over the years, from large and clear to small and difficult to read.

The letters will be added to the collection already held by Kingston University Archives and Special Collections, which includes the author's annotated libraries from her Oxford home and London flat and hundreds of letters to friends and fellow writers.

Key quotes from the Queneau letters:

Murdoch reveals that she even considered whether her state of mind might be one calling for  psychoanalysis. (11/1/53)

Self doubt
On the first draft of her novel (21/4/46): "There is something heavy in what I write...that makes me wonder if I shall ever write something good."

After seeing Queneau: "How rarely it (love) occurs without hurt to one or both parties - or rather both, for if one is hurt, both are hurt." (20/9/47)

In a 14-page love letter, she writes: "I would do anything for you, be anything you wished me, come to you at any time or place" but she says the major barrier in their relationship is that "you don't need me in the way in which I need you". (24/8/52)

She says she feels "sad I shall never know you properly...we shall be acquainted with each other only through letters...our meetings in the flesh can only be 'strange interludes'." (11/1/53)

Marriage (Murdoch was engaged to William Wallace Robson, an Oxford academic, in 1950)
"I must lose someone I'm attached to, as I can't bring myself to marry him. We are simply tearing each other up." (6/6/50)

"...I was bothered about trying to marry someone but it did not come off....if I could only stop thinking about marriage maybe I'd get some work done." (13/3/51)

"I'm married now (and better write to me incidentally under my married name BAYLEY, under which I shall be masquerading!" (22/4/57)

Death of a Lover (Murdoch was engaged to writer Franz Steiner, who died in 1952)
"Someone whom I loved very deeply and from whom I was beginning to hope very much has died suddenly."

"Everything has changed. Strange how all wishes and interests can perish...at the moment I can't see how to get on at all." (13/12/52)

Religion
"I often wish I could be Christian, there is such worth there and values which are real to one but the rest remains a fairy tale to me." (13/10/46)

Career
"Imagining my life will begin when I chuck philosophy and just write novels and poetry. Philosophy takes all my lifeblood at present and I'm not brilliant at it." (18/12/48)

Further information: The letters were acquired with grants and donations from the MLA/V&A Purchase Grant Fund, the National Heritage Memorial Fund, The Breslauer Foundation, Friends of the National Libraries, members of the Iris Murdoch Society and Kingston University's Faculty of Arts and Social Sciences.

The letters will be exhibited at the International Conference on Iris Murdoch, entitled Murdoch on the Margins, to be held at Kingston University on 10-11 September 2010.