Mining the seams of creativity A young designer from Kingston University has dug deep into his childhood memories to find the motivation for his latest fashion collection.  Liam Stafford is getting set to unveil a striking range of womenswear during Graduate Fashion Week, inspired by his dad who spent years working in a Cornish tin mine.

The pit of South Crofty played a big part in Liam's life. His dad, Anthony Stafford, worked in the celebrated mine near Camborne for almost a decade, until it closed in 1998. As a teenager Liam became intrigued by the hot, damp, dusty world that swallowed his dad up each day. That made exploring the magic of the mine a natural choice when he started developing his latest range of clothing, he said. "I wanted to show how you can create beauty from the grey environment of the mine," Liam said. "My dad was away a lot when I was young, and I became fascinated by the world he was spending time in. He is a heroic figure in my life, and researching this collection made me feel closer to him," he explained.

Liam studied photos taken by his dad, and archive images of mining, to get a feel for what it was like underground. Using colours and patterns inspired by the subterranean landscapes, he created a range of luxurious dresses that he describes as ultra feminine, but with an edge.  His collection is made from mohair and silk organza. The blacks and slate greys of the short, figure-hugging garments are interrupted with occasional stripes of bright canary yellow, inspired by shafts of light from miners' headlamps. Tiny clusters of Swarovski crystals scattered along thin vertical panels of silk organza look like glimmers of precious ore, and the semi-translucent fabric is covered with a smudged pattern reminiscent of dirty hand prints.

Liam has always been interested in textiles and clothing, and after studying a foundation course in art and design in Truro, he had his heart firmly set on pursuing a career in fashion. He chose to study at London's Kingston University after visiting the Fashion Department with his family. "I wanted to be near London, but, coming from Cornwall, I thought being in the middle of the city might be too much of a change," he said. "Kingston's Fashion Department had a real buzz about it, and the course has a fantastic reputation, so it seemed perfect." Now in the final year of his BA (Hons) degree, Liam has particularly enjoyed the technical aspects of the course, and has been strongly influenced by the emphasis on good pattern cutting. "I'm a real perfectionist when it comes to patterns," he admitted. "It's vital to get things absolutely right, particularly when you're designing the kind of body contour dresses in my womenswear range." 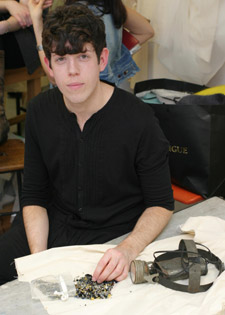 Late designer Alexander McQueen and fashion photographer Tim Walker have both been big influences on Liam's work. In a nod to Walker's dreamy images, Liam has tried to give his clothes an ethereal feel while maintaining an edgy quality. The showpiece outfit of his collection is a short-sleeved, black and yellow mini-dress made from mohair panels with translucent drapes surrounding the body. "When it appears on the catwalk the mohair will be brushed so that it fluffs up," Liam explained. "Light shining through the material from behind will create a haze, a bit like an aura, recreating the sense of a dirt-covered miner emerging from a mine." Liam has even bought an old miners' headlamp from ebay and decorated it with Swarovski crystals. "I wanted something straight from the mines," he said. "The headlamp is from 1938 and it will really set off the outfit."

Senior lecturer Hannah Jordan said Liam has really challenged himself with his latest collection. "He has used mohair and organza, fabrics that are traditionally very tough to work with - especially when put together," Ms Jordan said. "The silhouettes of his garments have a powerful feminine presence - challenging the female form with his signature use of sharp pattern cutting".

As for his dad, Liam says he is extremely impressed with what the young designer has achieved, but still finds it all a bit bemusing. "Dad says he doesn't really understand how I've turned pictures of mines into beautiful clothes," Liam said. "He's very proud of me though."