What does your working lunch consist of? Do you have a sandwich and a bag of crisps at your desk? Or a bar of chocolate as you dash between meetings?  Or even a crafty pint in the pub round the corner? 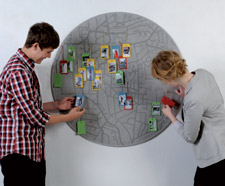 Two students from Kingston University in London have come up with a project which, they hope, will put an end to all that. It's called 'Walking Lunch' and it's designed to ensure office workers get a bit of exercise during the day so they remain healthy for longer.

Rachael Ball Risk and Jenny Rice have already won a prestigious RSA award for the idea and are eventually hoping to send their project pack out to workplaces throughout the UK.

Workers will receive a giant map detailing the area a mile and a half around with their office, with the office itself in the centre. Each day, they can choose somewhere within the map area to walk to. The pack will contain directions for them to follow and - if the walkers take photographs when they reach their destination - they'll be able to print out stickers to put up on the map. They'll also receive their own pedometer, so they can measure how far they walk each week.

Rachael, from Guildford in Surrey, and Jenny, from Okehampton in Devon, trialled the idea at the offices of a property management company. "Staff really liked the idea of getting to know more about their neighbourhood," Rachael said. "They said that developing their local knowledge would be useful in their work, as well as good for their health."

The project has already won a Design Directions Award from the RSA; it showed "real potential for a successful new enterprise" according to one of the judges, Marina Pickles.

The competition addressed ways that workers could keep fit in an era when more people than ever before perform sedentary office jobs. Entrants were set a target of designing an activity which would encourage teamwork among staff. 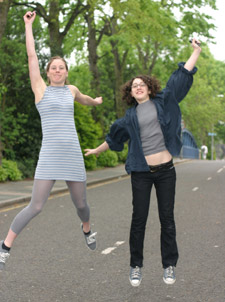 "It was completely different to anything we'd done up to that point in our careers," Rachael said. "We were up against Product design students and social designers so we were absolutely stunned when we found out that we'd won."

"There were a lot of requirements in the brief," Jenny added. "It couldn't be too expensive and it had to be implementable within six months."

"Rachael and Jenny should be very proud of what they've achieved. It was a hugely prestigious competition but their idea is a very simple one that could make a big difference to people's lives," Rebecca Wright, Kingston University's course director for Graphic Design, said.

Not content to rest on their laurels, Rachael and Jenny have refined and improved their designs and will be exhibiting them at Kingston University's Faculty of Art, Design and Architecture's Degree show from June 6 to June 11.

The show, which is open to journalists, photographers and the general public, showcases some of the latest cutting edge ideas from the worlds of animation, illustration, architecture, interior and exterior design, film-making, photography and surveying. "Industry specialists have already shown a keen interest in the ideas generated by several of this year's students and I'm sure their work will attract even more attention after the degree show," Rebecca Wright said.

Find out more about studying graphic design at Kingston University.