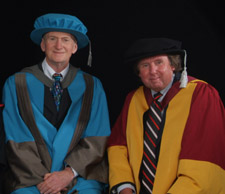 A social services director who fought for a change in the law that gives greater independence to people with disabilities has been awarded a Doctorate of Science by Kingston University and St George's, University of London.

Roy Taylor, who was the longest serving director of social services in the country when he retired last year, campaigned successfully alongside disabled people for legislation that allowed councils to give direct payments to residents receiving care in the community. Since the law was introduced more than a decade ago, the principle of giving people with disabilities greater control over their own finances has remained at the heart of government policy.

Mr Taylor began his career as a social worker in London in 1970 and became Director of Social Services for the Royal Borough of Kingston in 1990 - a role he held for 19 years.

Following the tsunami on Boxing Day 2004 Mr Taylor took on the lead role for directors of social services to ensure help was provided for survivors in need of social care. He became the lead director on all civil contingency matters and has represented the Association in work connected with the bombings in London and Bali, Hurricane Katrina, an earthquake in Pakistan, and the UK floods of 2007. "Children may have lost their parents, families have may lost their main breadwinner, so this kind of work involves trying to cut through red tape to give people the practical help they need to come to terms with what has happened to them and so they can start to rebuild their lives," said Mr Taylor.

In spite of the challenges highlighted by cases such as the death of Baby Peter, Mr Taylor said social work was a hugely rewarding career. "To see a child in care go on to get a degree, to see a disabled person become more independent or to see an older person live a more active life, these are the kind of things that make social work such a satisfying career."

He added: "There are days I wish I had not experienced, but overall I'm glad I had a job that fulfills that basic need to help people."

The biggest change in the job over the past 40 years, said Mr Taylor, had been the increasingly intense scrutiny from the media, which had now reached "X-Factor level" proportions, and had been accompanied by more inspections from independent agencies. "This is why I think it's important that young social workers go into the job with their eyes open, and why they will need to draw on the qualities of resilience, maturity and empathy," he said.

Through his work for the Association of Directors of Social Services, Mr Taylor pressed for the introduction of what became the 1996 Community Care (Direct Payments) Act. It allows disabled people to live as full a life as possible by deciding how they spend money for services such as personal care, transport and meals. "Rather than exercising power, giving away power so that disabled people have greater control over their lives is probably the single biggest achievement of my career. It was particularly satisfying to be able to work alongside disabled people," he said. 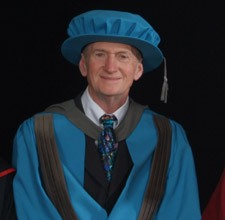 Mr Taylor, who lives in Guildford, was elected president of the Association in 1997 and in 1998 received a CBE for his contribution to social services. During his year as president he led the Association's work to establish a scheme to develop the talents of managers from ethnic minority communities and became a mentor in the scheme. He has also served as a trustee on the Board of the Social Care Institute for Excellence and was an adviser to the Disability Rights Task Force.

A keen cyclist, he led a team of Kingston staff and local people on a Land's End to John O' Groats bike ride in July 2006 to raise funds to assist survivors of the Pakistan earthquake and to help establish the Royal Kingston Rehabilitation Centre in Lahore. He is also a guitar player and plays in a pop band, the P45s, and a heavy metal group called Crossfire.

Ray Jones, a professor of social work based at Kingston University a former director of social services said Mr Taylor had made a significant contribution to social services at a local, national and international level. "Roy's a person of great intellect and integrity who has been much respected both by the people he managed and by the people he worked alongside," he added.

Receiving his award at the Royal Festival Hall in central London, Mr Taylor said: "I was so delighted when I got the call about the doctorate. The fact that it's from Kingston means so much to me because the university is right at the heart of the borough and contributes so much to it." Mr Taylor was presented with his doctorate at a ceremony for graduates from the Faculty of Health and Social Care Sciences, which is run jointly by Kingston University and St George's, University of London.