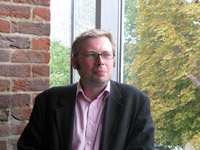 Creating a vibrant research environment and connecting universities to intelligent public debate are key aims for Kingston University's latest addition to its senior management team. Professor Martin McQuillan, Kingston's new Dean of the Faculty of Arts and Social Sciences is keen to encourage critical thinking that links in with contemporary issues. He believes academics can help transform the terms of public debate, making an impact in London and on the national and international stage.

A Professor of Literary Theory and Cultural Analysis, at 37 Professor McQuillan is one of the youngest deans in the country. His own research includes Deconstruction After 9/11, which examines global politics from a philosophical perspective. His study Deconstructing Disney, co-authored with his wife Dr Eleanor Byrne from Manchester Metropolitan University, looked at how Disney reinvented itself to capture a certain cultural world view after the Cold War. "I think that this is the moment for the humanities and social sciences in the United Kingdom to move beyond the sterile, artificial and very Anglo-Saxon distinction between universities and the wider world," he said. "It is a question of intellectual freedom without restriction in the public realm. I want to encourage academics to risk a contribution outside the university and so raise the tone of public debate."

Raised in Glasgow, Professor McQuillan completed an MA (Hons) in English Language and Literature and a PhD in English Literature at Glasgow University. He left in 1997 to teach English at Staffordshire University, before moving to the University of Leeds in 2000. During his time at Leeds he became Head of the School of Fine Art, History of Art and Cultural Studies at 29 and later Pro-Dean of Research and Director of the Faculty of Performance, Visual Arts and Communication Graduate School. He was appointed Professor of Cultural Theory and analysis in 2005.

Professor McQuillan was attracted to Kingston by the atmosphere, liking a university run by academics for academics. As well as increasing the Faculty's research output, he aims to build on Kingston's excellence in teaching and continue to improve the higher education experience for students. "Coming to Kingston is an incredible opportunity to do something really interesting in London that hasn't been done anywhere else, combining research intensity with a social mission, from Foundation Degree to PhD," he said. "Both are about hope in a better future. The University has grown enormously in the last few years and is really making an impact. This is a great opportunity to lead the Faculty into the next stage of its development and to encourage a step-change in its research profile. I want to produce a really vibrant research culture to go along with the exciting and innovative array of courses and teaching. This will benefit students who will leave university as good, critical and intelligent thinkers who go on to make a real impact in the world."

Kingston's Vice-Chancellor Professor Peter Scott said staff, students and the wider community would benefit widely from Professor McQuillan's appointment. "I am delighted that Martin has come to Kingston and taken up the reins of what has been a very successful Faculty," he said. "His intellectual and wider cultural vision, to recreate vital connections between the humanities and social sciences and the key issues of our times, is one I very much share."