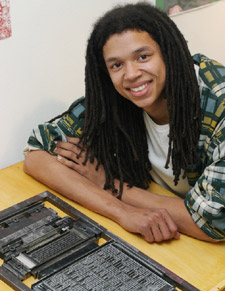 Appearances can be deceptive and students at Kingston University's Faculty of Art, Design and Architecture are aiming to provoke visitors and overturn their preconceptions at this year's undergraduate degree show.

The theme of the show is 'It's not what you think...' and is "is an opportunity to get an exciting insight into the creative thinking of a new generation," according to Dr Simon Ofield-Kerr, Dean of the Faculty.

Rosemary Anrude and Jack Neville have both investigated new techniques for assembling furniture - Jack says the recession inspired him to design less expensive ways of manufacturing household items. Graphic Design student Luke Ngakane has compiled a list of non-words, all of which were rejected by the Oxford English Dictionary.

In film-making, Sarah Begum described making her film in a remote Ecuadorian rainforest community as "a life changing experience". Joely Brammer's project "Seven Deadly Sins" is likely to prove one of the most eye-catching works among the Illustration and Animation displays. And James Shaw, a product and furniture design student, has invented an algae cultivator which, he says, will be capable of producing 25 per cent of a family's food. 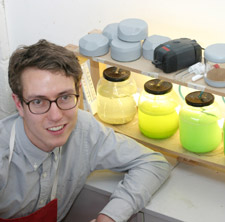 "Each year our Degree Show demonstrates the hard work, energy and talent of our students," Dr Ofield-Kerr explained. "It offers an early glimpse of tomorrow's leading designers, who will join the ranks of such acclaimed former students as Jasper Morrison, James Irvine, Fiona Banner and David Chipperfield."

Several pieces of work on display have already attracted interest from the design industry. One has won a Royal Society of Arts Design Directions award, another a competition to design a website and logo for a school for children with severe learning difficulties. No fewer than five Graphic Designers have been nominated for the prestigious D&AD awards, the highest number from any British university. But most of the students would be working right up to the wire to finish their projects so there were likely to be some surprise 'stars' of the show, Dr Ofield-Kerr said.  "Even the lecturers who have been working with these students throughout their undergraduate years are sometimes astonished by the ideas on display," he added.