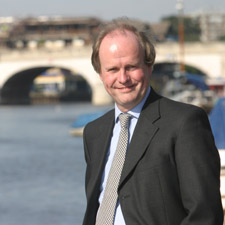 "At a time when the new Government is slashing public expenditure it has never been more important to stand up, and speak up, for universities - which, unlike the National Health Service, have not been promised protection from the cuts. This is why Universities UK has organised a special 'Universities Week' to highlight how crucial higher education is to the nation's economy, to the health of our society and to the ability of individuals to achieve their full potential.

"The economic footprint of a university is very significant. Kingston University has an annual budget of almost £200 million, employs well over 2,000 staff and enrols more than 23,000 students. That creates a lot of jobs and a lot of demand. The standard calculation is that the economic impact of a university is two-and-a-half times its budget - so in Kingston's case half a billion pounds.

"Kingston also makes a key economic contribution in other ways. Every year more than 5,000 people graduate from the University. Many are local, and many more will at least begin their careers in and around Kingston (and some will establish their own micro companies or become free-lance entrepreneurs). Some will already have contributed to the local economy by taking on part-time jobs when they were students. Finally the University runs enterprise services to help business, by offering customised courses and translating research results into commercial (or socially useful) products.

"But that is not the whole story. The University also makes key contributions to cultural life. For example, it is one of the main sponsors of the Rose Theatre which has established itself as a front-line theatre within less than two years of opening - and which has already begun to transform Kingston's night life. The Rose is just the most prominent example - the Stanley Picker Gallery has hosted a succession of exciting work and Dorich House an acclaimed exhibition of Dora Gordine's life and sculpture; Radio 3 has broadcast new music composed by Kingston staff.

"Perhaps because we are still prisoners of C P Snow's two cultures - science and the arts - we sometimes mistake the very powerful connection between the University's economic footprint and its cultural mission. But a contemporary American scholar Richard Florida points to what he calls 'clever cities' - places were entrepreneurs and critics, inventors and artists, mingle. These are the places, he argues, where the wealth of the 21st century - economic, cultural and social - is being generated. Kingston is well placed to be one of these 'clever cities' thanks to its University.

"But the true social value of Kingston, and of any university, lies with its graduates. First, they are tomorrow's professionals - social workers and nurses, scientists and engineers, writers and designers. But, secondly (and maybe even more significantly), they are tomorrow's citizens. Graduates are more likely to vote, more ready to participate in voluntary organisations, more tolerant and liberal - they are even less likely to commit crimes. This is not because graduates are better than everyone else; it is that they have had more opportunity to fulfil themselves and realise their potential. Of course, that should be a universal right, which is why universities like Kingston committed to extending opportunities and widening participation make such an important contribution to the future of our country - and our world."