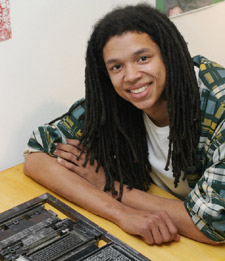 Have you recently heard an earworm? Taken part in a nonversation? Or been for a sprog?

All three are 'non-words', which have been compiled by Kingston University Graphic Design student Luke Ngakane. Luke discovered that the Oxford University Press has a vault where it stores words that have been rejected for inclusion in the Oxford English Dictionary. An earworm is "a catchy tune that frequently gets stuck in your head"; a nonversation is "a worthless conversation in which nothing of note is explained or otherwise elaborated upon" and sprog means "to go slower than a sprint but faster than a jog".

Rejected words are saved and periodically revisited by the compilers as one day they may decide there's a need for the word wurfing ("the act of surfing the internet while at work") or whinese ("a term for the language spoken by children on lengthy trips").

Luke's 'Dictionary of Non Words' was one of the designs making headlines at Kingston University's Faculty of Art, Design and Architecture's Undergraduate Degree Show last week. The show encompassed illustration and animation, film-making, interior and exterior design, photography and architecture.

The dictionary's letterpressed text is printed on a poster in a very faint shade of off-white, deliberately chosen by Luke to reflect the words' shadowy status. "They are there, they do exist, but you have to get really close up to see them," Luke, from Wellington in Somerset, explained. "One of the wonderful things about letterpress is that you can use any colour you can create, which you can't do on a computer." The poster also has a screen printed colour border. 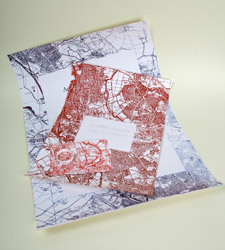 Luke spoke to the Oxford University Press and trawled internet forums to find the most useful 'non-words'. Have you ever wondered what to call the silver foil coating on instant lottery cards? How about - scrax? Or needed a term to describe the time of year when Spring and Summer can't decide which is going to come first? Try sprummer.

Luke's favourite 'non-word' is polkadodge. "It's that dance that occurs when two people attempt to pass each other but end up moving in the same direction," he revealed. "It's such a great word to use."

Luke has recently been shortlisted for the prestigious D&AD awards for a campaign promoting Metro newspaper. "Luke's projects show the potential for graphic design to both inform and entertain and demonstrate real creative agility," course leader for Graphic Design Rebecca Wright, said. "Both the 'Dictionary of Non-Words' and the Metro posters will get him a great deal of well-earned attention." 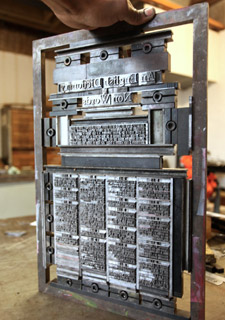 Dringle - a watermark left on wood caused by a glass of liquid;

Locavor - person who only eats locally grown or produced food;

Quackmire - the muddy edge of a duck pond;

Spatulate - to remove cake mixture from the side of a bowl with a spatula;

Vidiot - someone who is inept at the art of programming all modern video equipment.