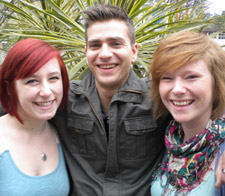 Two fictional sisters tell the story of the Peasants' Revolt of 1381 in a new play produced by Kingston University.

'None But Friends', written by Kingston University lecturer Allan Swift and co-author Robert Johns will be presented in modern dress at the Rose Theatre as the centrepiece of the International Youth Arts Festival in July. The Earl of Wessex, Prince Edward, will be attending a special gala performance on July 8.

Suitable for audiences aged 12 and over, the writers promise a thrilling tale of passion, murder and mutiny. Mr Swift, a scriptwriter who has written for Hollyoaks, Casualty, Eastenders and The Bill, said the production was epic in its scope and ambition, with a cast of forty. "It has a broad appeal because it's a dramatic story told with verve and tremendous pace," he said. "It's brutal in its violence but it's also funny and tender."

Women play no part in traditional accounts of the rebellion but Mr Swift has created sisters Anne and Kate Gibson who play leading roles in the revolt that marked the beginning of the end of feudalism in Medieval England. "Women only ever seem to appear in Medieval history as witches on ducking stools so we thought we'd try and tell their stories too," Mr Swift, who teaches screenwriting at Kingston University, explained.

Set in the village of Walmer in Kent, Anne and her friend Robert Coombes, played by Kingston University student and former Emmerdale actor James Hoare, 30, join a march to London to protest against state corruption and excessive taxes. Kate stays at home and, in a echo of the 'landgirls' in the Second World War, joins other women in bringing in the harvest while the men are away.

Emily Spacie, 20, a third year drama student who plays Anne said: "I think it's great that the role of women is recognised in the play, it makes it more appealing to a modern audience." Emily, who began acting as a pupil at The Chase School in Malvern, Worcestershire, added: "My character is headstrong and vengeful but she's driven by a sense of fairness and won't let injustices pass by."

Fellow drama student Rosie Hopkins, 20, from Dorset, said 'Kate' was equally strong-willed. "She's a defiant character who fights for women to be paid the same wages as the men." Rosie, who went to Lytchett Minster School in Poole, said she was excited and a little daunted by the task ahead. "I've never done anything on this scale before. It'll be invaluable experience working with a cast of this size in such an awesome London theatre," she added.

The cast of characters includes 14-year-old King Richard II, played by Aidan Rhodes, who goes to Reed's School, Cobham, and Timothy Weymouth, of The Hollyfield School in Surbiton, who confronts the rebels and deflects their anger with promises of reform.

The play's title comes from chronicles of the time, which describe how the mayor of London tells the peasant army they "will find none but friends in the city". The first draft was written almost 30 years ago to mark the revolt's 600th anniversary but it was mothballed until the writers decided to revive it for the youth festival. For the riot scenes, Mr Swift said he drew on his own experiences of the demonstrations against the poll tax in 1990.

Students and staff throughout the university are helping to produce the play, from designing posters and handbills to choreographing dance scenes and writing a musical score based on 14th century French ballads. Film students are making a documentary which they plan to turn into a 30-minutes DVD.

A limited number of tickets to the gala night and champagne reception with HRH The Earl of Wessex are available priced £40 from phil@iyafestival.org.uk.