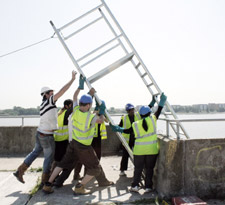 As part of the London Festival of Architecture, architecture students from Kingston's Graduate Diploma and Masters courses have built two structures which will be formally unveiled on Saturday at Gallions Reach in London's Royal Docks. Both 'Shed' and 'Ladder' will be open to the public at weekends throughout the festival (June 19 - July 4).

A road links Gallions Reach DLR station, where 'Shed' is situated, to Armada Green, a new public landscape designed by Adams and Sutherland Architects, where 'Ladder' stands overlooking the Thames.

'Ladder' resembles the steps up to a diving board and allows people to climb over the sea wall and down onto a drainage culvert on the river side of the wall. "It's a beautiful view of the Thames, which is soon to be lost," said Shaun Young, one of the Kingston team who worked on the project. "You can climb the ladder and cross over the railing to the culvert or pause on top and experience the view."

The students would like members of the public to suggest uses for the shed. There will be a mailbox in which they can post their ideas and people who come up with the best ideas will be given the key to the shed to put them into practice. The structure has been built using untreated steel which is deliberately designed to corrode during the time it stands on the site. It will also act as a gateway, allowing access to a piece of normally fenced-off private land. The structure is raised off the ground to allow wildlife to cross between the public and private areas.

Collectively, the two projects question the existing value and potential of an area which is due to be converted into a shopping and residential centre as part of the London Development Agency's plan for Gallions' Quarter in the Docks' Albert Basin.

At the official launch on Saturday June 19, the team will be hosting a barbeque with live music between 11.00am and 18.00. Members of the public are welcome to drop by. Live music will be pumped down to the riverfront so people can enjoy it while they are taking in the rare views of the Thames.

The live project gave many students their first experience of being on site, Frank Furrer, senior lecturer in Architectural Technology and Tectonics at Kingston University, who oversaw the students' work said. "Some of the students were really strong on the design side, while others really stepped up on site," he said, "they were real leaders on site".

The project was funded by the London Development Agency and supported by Design for London. 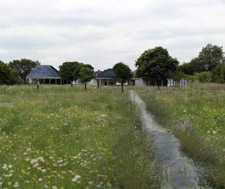 The festival will also showcase the designs of another Kingston University student Helen Goodwin, for a crematorium and cemetery close to where the elevated M11 and the north circular road meet (known locally as 'Charlie Brown's roundabout' after the landlord of a pub that used to stand there). It looked at how a haphazard post-industrial flood plain could be transformed into a managed wild flower meadow where people's ashes could be scattered to create a landscape of memorial. The project will be on display in 3D Reid's office during the festival.