A surge in the number of graduates applying for MA courses in art, design and architecture is being triggered partly by the recession, according to academics from Kingston University.

Speaking prior to the launch of this year's MA Graduation Show at London's South Bank on 7 October, Dean of the Faculty of Art, Design and Architecture, Dr Simon Ofield-Kerr, said he believed that people were re-evaluating the benefits of having an MA in the current crowded job market. "The level of interest in MA courses at the Faculty of Art, Design and Architecture at Kingston University is unprecedented," Dr Ofield-Kerr said. "There's an increasing awareness among graduates and employers that an MA gives people the edge, making them more focused and specialised in their disciplines, which is absolutely crucial during the economic downturn."

"This year promises to be our best MA Graduation Show yet, and it's a great opportunity to view the work of a remarkable group of artists, designers and curators at the beginning of their influential careers," Dr Ofield-Kerr said.

Professor Catherine McDermott, who heads up Kingston's MA in Curating Contemporary Design and is overseeing this year's Design Show, agreed that the appetite for MA design courses had exploded during the past year. "The word is spreading that we're building a vibrant postgraduate culture here at Kingston University and we are expecting a lot of people - from the creative industries to the general public - to come along and see the amazing work by this year's MA graduates," she added.

The Faculty of Art, Design and Architecture's MA Graduation Show runs from 11am Wednesday 7 October to Sunday 11 October at the Bargehouse exhibition space, at the Oxo Tower Wharf, on London's South Bank. From fine art to product design, illustration to landscape, the show will feature the cutting-edge work of more than 150 of the next generation of artists and designers.

Among them is Jaimi Stewart, 24, from Thornaby-on-Tees, who has graduated with an MA in Production Design for Film and TV. Her spooky model for a set design features a "hellish fairground" with a carousel transformed into a meat grinder, waltzers which swallow guests and a "hell hole" donut bar which serves human flesh. "I was inspired by a dilapidated fairground in a graphic novel, The Killing Joke, in which it is the evil Joker's Lair, and brought my own villainous ideas - such as the meat grinder - to this, plus the Joker's trademark purples and greens," Jaimi said. Creating the model, which is about a metre long, took four weeks and it has been scaled to fit in Pinewood's Studio D.

Hugh McClelland, 23, from Herne Hill, London, will be showing his 1m by 0.7m set design model of a fantasy market under the streets of London, complete with miniature Tube station and Globe theatre. "I wanted to reflect a world for those in society such as the homeless who have fallen through the cracks," Hugh explained. 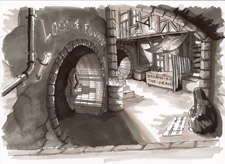 Award-winning theatre and film director Tim Hatley, the production and costume designer for Notes on a Scandal, will select this year's best of show works, while the branding for the show has been designed by graphic artist Vaughan Oliver, a visiting lecturer at Kingston University who has created visual identities for some of the world's top musicians.