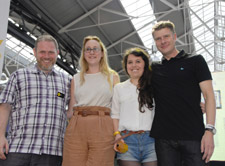 Graphic design students at Kingston University have come away from this year's D&AD awards with four Yellow Pencils, leaving their rivals green with envy. Another Kingston team was highly commended, while the University also won three D&AD New Blood awards.

"I'm particularly proud of the students and teaching team who have been so justly rewarded for their hard work," Rebecca Wright, course director for Graphic Design and Graphic Design and Photography, said. "As one of the D&AD Education team said to me afterwards - it was a Kingston clean-up!"

Jessica Reynolds and Serena Wise won the highest honour, the Student of the Year award at the ceremony, frequently referred to as the 'Design Oscars'.  They designed an eye-catching colour wheel in response to a brief set by IKEA to "inspire a wave of boundless change in people's homes by promoting the new IKEA catalogue". 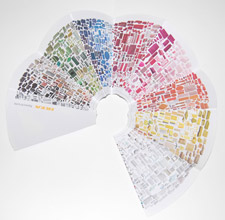 The wheel shows all the products in IKEA's 2011 catalogue organised according to their colour, enabling customers to choose and match items of furniture by colour. "We made several research trips to IKEA and watched the customers," Serena said. "We heard one woman talking about 'lime green accents'. We realised customers have an immediate response to the colour of a product."

D&AD Education Chairman Greg Quinton said the colour wheel idea was brilliant as it challenged the conventions of the day. "Organising the site by colour and product creates an elegant navigation system and brings the fun back to the brand," he said. Jessica from Guildford and Serena from London will now be able to further develop the idea on a placement at IKEA's advertising agency, 'Mother'.

Meanwhile, fellow Graphic Design students Bhavik Samani and Silje Løkken Rødvik are talking to the BBC about their idea for an extension to the BBC's iPlayer. BBC Lounge combines on-demand services like iPlayer and social networking sites so that viewers can watch streamed television programmes and talk to, or text, their friends at the same time. It allows simultaneous streaming so a group of friends can co-ordinate when they choose to watch a particular programme, or viewers can choose to watch a sporting event in the virtual company of a group of fellow fans.

"We got the idea when someone said they'd always be on the phone to their Mum when Eastenders was on - not talking but listening together and laughing at the same time," Bhavik, who is a director of the company which designs and prints the 'Love Music Hate Racism' range of clothing, revealed. "We ended up working 15 hour days for four or five weeks but it was worth it in the end." 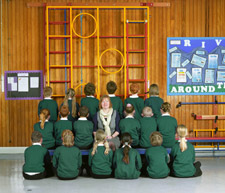 Anna Brooks and Samantha Harvey, who are studying Graphic Design and Photography, have already attracted the attention of several bloggers for their Class Portraits. The idea came to them when they visited a local school hoping to take photographs of children. "They said we couldn't take photos of the front of a child's face but we could take pictures of the backs of their heads," Anna explained.

The result is a comment on the paranoia surrounding pictures of children: a series of traditional class photographs in which every single child is facing away from the camera, so only the teacher's smiling face can be seen. The project won both a Yellow Pencil and a New Blood award. Anna also won a New Blood for a collaboration with Kate Callaghan on a project called Fallen Constellations.

Like Anna and Samantha, Tim Sanders won his Yellow Pencil in the 'What Else Do You Do?' category. A vinyl obsessive, Tim, from Brighton, decided to subject his record collection to extreme magnification. He put several discs underneath a microscope, enlarging them by 100 per cent. He needed to take fifty photographs to reproduce two complete rotations of a disc. "I noticed a big difference in the pattern on the grooves between different genres of music," Tim, who photographed records by The Clash, Roni Size and the soundtrack to 'Ice Station Zebra', said. "The Roni Size track also had lots of scratches on - I thought about removing them but it seemed more authentic to leave them." 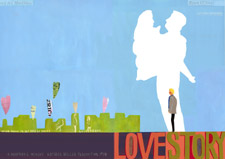 Illustration and Animation student Chryso Haralambous won a New Blood for a poster she produced for the 1970 film 'Love Story'. "A panel of industry judges tours more than 80 UK and international college stands and selects the best representative work; they only award around 20 'New Bloods' each year out of thousands of pieces of work so this is a real coup for Chryso," course director Geoffrey Grandfield said.

"We are incredibly proud of the success of our students," Dean of the Faculty of Art, Design and Architecture Dr Simon Ofield-Kerr commented. "It's great that their achievements, the strength of the courses and the commitment of the staff have been recognised in this way."