A different class of school photo

We all remember our school photographs. Everyone pushing and shoving or trying to adopt cool poses while a beleaguered photographer tries to instil some kind of order, desperately hoping one of the teachers will spring to the rescue. Now two Graphic Design and Photography students at Kingston University have used this traditional concept to produce a set of award-winning photographs. 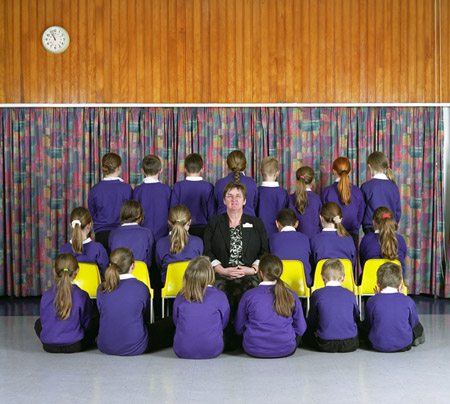 "The previous year we'd visited a school in Kingston wanting to take photographs of children using some stamps we'd designed," Samantha Harvey explained. "The Head told us we could only photograph one child and only from the back of his head. The idea just sprang from that."The result - a series of classic class photographs in which only the form teacher is facing the camera - is a comment on the paranoia surrounding photographs of children. "Most people who've seen the photographs have commented on the simplicity of the idea," Anna Brooks said.

Anna, from Brighton, and Samantha, from Bath, have just completed their degrees in Graphic Design and Photography at Kingston University in London. Prestigious Design charity D&AD awarded 'Class Portraits' both a Yellow Pencil and a New Blood Best in Show Award. Anna also won a Best in Show for another piece 'Fallen Constellations' which she worked on with Kate Callaghan.

While the images in Class Portraits seem far-fetched, the two students argue that it is the direction in which education policy is going: "the ethical issues and paranoia surrounding the laws of photographing children in today's society are confusing and somewhat farcical. But at what point will the photography of children be completely forbidden?"

The pictures were taken at two Essex Primary Schools, Milldene in Tiptree and Mayflower in Harwich. The headteacher of Mayflower, Steve Springett, liked them so much he included them in the school newsletter. "The Ofsted arrangements on Child Protection have changed so it's been a really big issue in the last twelve months," he said. "We had to brief the pupils beforehand. They were pretty confused; they thought it was the end of year photo come early." 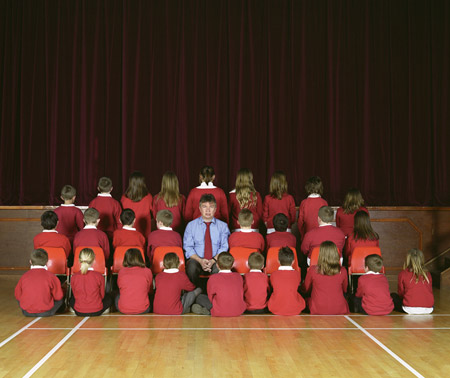 Samantha and Anna used the University's portable studio flashlights and worked on the pictures in the digital darkrooms at the Faculty of Art, Design and Architecture. "As soon as I saw their pictures, I went and asked my colleague Vince Wade to have a look," Bruce Morgan, one of the technical specialists in the department said. "We both knew immediately they were a unique set of images and gave each other 'that look' of approval. The images have so many visually strong elements which represent the underlying sociological concept - they are great.

"Ever since they arrived at Kingston, Anna and Sam have spent a considerable time in the Photography Department, progressing with their ideas and developing their skills to a high standard, so we're all really delighted with their success."

Anna also won a D&AD New Blood Best in Show award for another piece 'Fallen Constellations' which she worked on with Kate Callaghan. The photographs, all taken at dawn or dusk, show the Plough, Orion and other constellations as though they have fallen to earth.