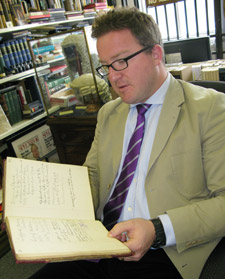 An official ledger containing hand-written details of all MPs and peers declared bankrupt between 1902 and 2001 has gone on display at Kingston University's Muir Hunter Museum of Bankruptcy.

Details of destitute dukes, bust barons, cash-strapped countesses, needy knights, debtor dames, monetarily-challenged MPs and other penniless peers from throughout the 20th Century are revealed in the book, now on long-term loan at the University's Kingston Hill campus in South West London.

"The book was loaned to us by the UK's Chief Bankruptcy Registrar Dr Stephen Baister and gives us an intriguing insight into the money troubles of some of our parliamentarians over the years," John Tribe, leading bankruptcy expert and Kingston University lecturer, said. "If a peer or MP is made bankrupt they're not permitted to sit in the legislature until the order is discharged, and prior to 1986 a formal return had to be made to the Speaker of either the House of Lords or House of Commons to notify them of the situation. It's fascinating to have the details of all those barred from Parliament over the last century here in this register," he explained.

Leaping out of the ink-stained pages is the case of Lord Lucan, declared bankrupt in August 1975 by virtue of having fled the country. The register claims that "John Richard Bingham, 7th Earl of Lucan, whose present residence is unknown", left England on or around 8 November 1974. "For his creditors to be able to claim Lord Lucan should be declared bankrupt because he had absconded, there must have been strong evidence to suggest that was the case," Mr Tribe said. However, many people have since argued that if Lord Lucan did flee the country as is suggested in the ledger, it was to avoid a potential murder charge rather than to slip away from the clutches of his creditors. 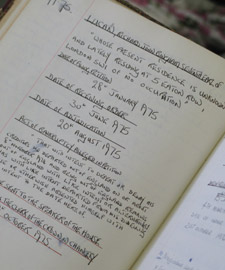 One of the most frequent entrants in the book is the 9th Duke of Manchester William Montagu who, ironically, shares his name with the father of modern insolvency law, Basil Montagu QC.  The Duke appears on the ledger's pages no less than three times between 1915 and 1935, seemingly following in the footsteps of the previous two incumbents of the title who both allegedly had a taste for the high life. As one of the highest-ranking aristocrats cited in the book, the 9th Duke's fall from grace was one of the most significant - his exploits culminated in the sale of all of the family's land during the 10th Duke's tenure.

The children of some of the most revered politicians of their day also find themselves paraded as paupers on the register's pages. The 2nd Earl of Halsbury, eldest son of former Lord Chancellor Lord Halsbury - author of the famous legal encyclopedia Halsbury's Laws of England - was declared bankrupt in 1938 and wartime Prime Minister David Lloyd George's son Richard, 2nd Earl of Dwyfor, was thrown out of the legislature his father used to lead in 1947. The most notable entrant of recent times is perhaps the last name in the book, Neil Hamilton. The synopsis of the former MP's case is brief, simply stating that his was bankruptcy case number 5,981 of the year 2001.

According to Mr Tribe the way bankruptcy is perceived has changed dramatically since the start of the 20th Century and it is interesting to consider whether people who have been declared broke should have the right to sit in the legislature.

"In the early 1900s bankruptcy was viewed as a more serious offence than it is now, and bankruptcy law was a much more punitive system," he said. "It was more about punishing miscreant behaviour and making sure an offender's ability to trade was withdrawn. Since the 1986 Insolvency Act and the introduction of out-of-court administration in 2004, bankruptcy procedures have increasingly focused on rehabilitating debtors and reducing stigma - so perhaps one day being insolvent won't be a bar to sitting in Parliament." 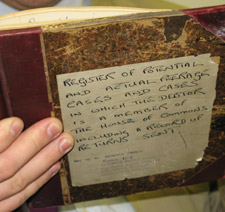 The shift in emphasis from punishment to rehabilitation has come about partly because of the increasing amounts of money that people have been able to borrow over recent years, Mr Tribe said. "If you're going to lend massive amounts of money you need to find ways to make sure people can still play a part in society if it goes wrong."

As well as the ledger of peers and MPs, Chief Registrar Dr Baister has also passed a book containing a list of bankruptcy case files to be preserved because they are of permanent public interest to Kingston University's Muir Hunter Museum. The list includes Ronald Cornwall, father of the novelist John Le Carré, the 1957 world snooker champion John Pulman and the 1956 Olympic flyweight boxing champion Terrence George Spinks.

An exhibition charting the history of bankruptcy curated by Mr Tribe has recently been unveiled at the Royal Courts of Justice in central London and will be open to the public for the next 12 months. More information about the exhibition can be found on Mr Tribe's bankruptcy and insolvency blog.