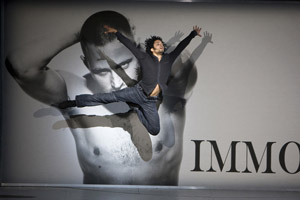 Jason Piper, Kingston University's Head of Dance, is currently starring in a Europe-wide tour of Matthew Bourne's critically-acclaimed Dorian Gray, which comes to the New Wimbledon Theatre next week (6-10 October).

Best known for his lead role in Matthew Bourne's all-male Swan Lake, and his work on Kylie's Fever world tour, Jason said: "It's important for students to see their lecturers out there, working in the field that we teach about, and Kingston is at the forefront of this trend. By doing this, we are developing and refining our own professional practise so that we know what works. It ensures that what we teach isn't outdated theory, but remains current. It also means my students can come along and have a laugh at their dance lecturer giving it his all!"

Jason, who helped set up the University's thriving BA honours in dance three years ago, plays Basil Hallward, a photographer. In the fable, Dorian Gray (played by Richard Winsor) is a beautiful young man discovered by Hallward, who becomes his lover, and makes a pact with the devil to remain forever young. "Basil is a sensitive, tortured artist who has lost his mojo," Jason added. "He's quite different to the alpha-male roles which I often play, and it's a real challenge to portray his character without words. Dancing with another man gives audiences a new view on traditional ballet."

Dorian Gray will be at the New Wimbledon Theatre, The Broadway, Wimbledon, London SW19 1QG from 6-10 October. I've attached some images of Jason Piper in the production, with Richard Winsor.

Jason is not the only Kingston University talent acting out the fable. A film version of Dorian Gray, also adapted from Oscar Wilde's gothic masterpiece, is also currently on show in cinemas, starring Colin Firth and Kingston University star drama graduate Ben Barnes.