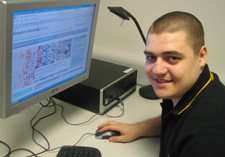 The first time Patrick Magee started tinkering with a computer he had no idea what he was doing. "I think I probably broke it," the 19 year old, from Sutton, said. Just four years on, all that has changed though. Thanks to a last-minute decision to undertake a degree, he is now in the thick of computer science studies at London's Kingston University after securing one of the final places available during 2009's Clearing season.

Despite worrying he wasn't cut out for university, Patrick has staggered himself by shooting straight to the top of his class. His success is a far cry from his early education when, after finishing only one year of A-level studies following his parents' divorce, he opted for alternative engineering qualifications. A spur-of-the-moment call to Kingston University's Clearing hotline set him on the right course. "The hotline operator was really understanding and, before I knew it, I was talking to an admissions tutor about my dreams of studying computer science," Patrick said.

One of the projects Patrick has most enjoyed during his first year at Kingston University has been creating an online site for avid gardeners modelled on Facebook. It saw him crowned "Best Student of 2010" by senior lecturer Dr Jarek Francik.

Programming enthusiast Patrick thinks his determination has been the key to his success. He remembers being worried about how he would match up to other students who he felt had done better than him at school. "I was anxious about being behind everyone else so that really drove me to prove I have what it takes," he said. Dr Francik believes Patrick's outstanding results are down to a real passion for the most challenging aspects of the course at Kingston. "He is well ahead of his class and in some aspects even of me. It shows just how far he's come," said Dr Francik, who now even features Patrick's work in a web tutorial.

Since winning over his course tutors with his grades Patrick has been invited to mentor first year computing science students. Considering his doubts about even going to university, he is now keen to have the chance to pass on some of his know-how to a new batch of students as they settle in next year. According to Patrick, the best way to learn is from someone who's having fun with what they're teaching. "My aim will be to make it exciting for them," he said.

Getting from computer rookie to degree-level computer whizz hasn't been easy, but Patrick is confident he is on the right track. Better yet, now he is doing something he loves.

Even in his spare time, the technology buff likes nothing more than working on computers, and when he's not programming for fun, he's building his own super PCs. Long term, Patrick has his sights set on working for a blue chip company.  "Coming to Kingston through Clearing has been the best thing that has ever happened to me," Patrick said. "I know my software engineering degree will provide me with an excellent foundation for the industry."