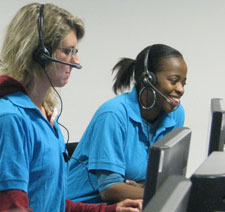 Namitasha Muunganirwa - 'Tasha' to her friends, had always dreamt of studying Law but admits she hadn't thought what she would do if she missed the grades she needed to get into her chosen university. Although slightly disappointed when she got her results - which were just shy of those needed for her first choice - Tasha, 21, got straight on the phone to Kingston University's Clearing hotline.

"The option of studying single honours Law was no longer available but I realised that I could take the opportunity to do something slightly different," she said. "I was interested in corporate law and had really enjoyed my business studies A-level so I decided to try a joint business and law degree instead. The person she had spoken to on the helpline had been really helpful and had found her a place on the course, Tasha said, which was just as well since she'd already turned down her other Law offers.

According to Tasha, who has signed up to be a Clearing hotline operator this year, for the thousands of callers who are looking for a place through Clearing the experience could be every bit as nerve-wracking as waiting for A-level results. "Only 12 months ago I was one of those callers myself," she said. "But coming to University through Clearing has been an incredibly positive experience for me so I am really keen to help others who are in the same position as I was last year." 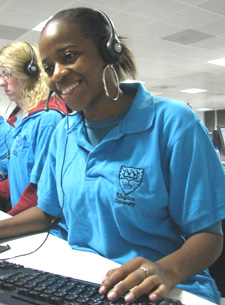 Tasha will shortly start the third year of her course and says she is enjoying her studies more than ever. "Adding business to law has meant I'm amassing lots of knowledge from both disciplines which I hope will make me more flexible and employable when I graduate," she said.

Since joining Kingston Tasha has also thrown herself into wider University life becoming heavily involved in a student-led charity initiative called 'Elevation Networks'. This nationwide project aims to increase the inclusion of under-represented groups across all industry sectors. A related project called 'visible women' has seen her organise networking events, drawing attendees from across the country.

Tasha, whose family hails from Zimbabwe, commutes from Luton to Kingston University every day to study. For her it is the perfect distance between home and university. "It is just far enough away to be able to enjoy the journey but close enough that it doesn't take ages to get into Uni," she said. With plans to move into Kingston with friends in the coming year, Tasha can't imagine things turning out any better. "Although it isn't what I originally planned to do, studying law with business at Kingston has turned out to be the perfect option for me," she added.