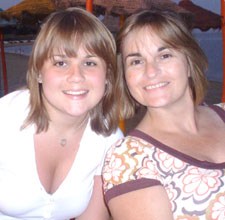 It was a case of mother knows best when Holly Morgan chose where to study. Holly, 19, was desperately disappointed when she failed to get the grades needed to go to her first choice of university. But she knew exactly where to call - Kingston University, where her mum Alex had just graduated with a first class degree in education and child care. "My mum had such a good experience at Kingston and what was good enough for her, was definitely good enough for me," she said.

Holly, who lives in Chigwell, Essex, with her mum, dad, and eight-year-old sister Victoria, has just completed the first year of a BSc (Hons) in Biology and Nutrition at Kingston. She loves the course but it was not what she planned when she was studying for her A-levels at Woodford County High School. "I was originally thinking about studying zoology but only because I was flicking through a prospectus and a friend was meant to say 'stop' - she forgot and I ended up with zoology!" she said. In spite of her light-hearted explanation, Holly had always been good at biology and knew she wanted to study a science subject. She phoned Kingston University's Clearing hotline and landed a place on a joint honours course in biology and nutrition. 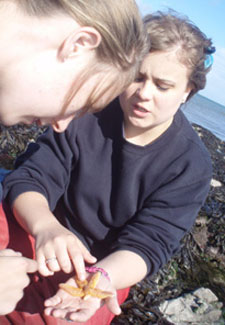 "I've been into biology since I was about three when I used to mess around in ponds and was fascinated by all the plants and wildlife," Holly said. "The course is very demanding but really enjoyable - the most interesting bit is human physiology, learning about the muscles and organs." Holly is aiming for a First or 2:1 degree and hopes to go to medical school to become a doctor when she graduates. "I didn't do quite as well in my A-Levels as I'd hoped - I went to a grammar school and found the final two years way too intense - but now I'm determined to make my parents proud," she said.

Her advice to anyone who does not get the A-level grades they expected is to keep calm. "Don't panic and don't just leave it or sit around moping. Get the newspaper lists of course vacancies and start phoning universities immediately," she said. "And think about alternatives - if you can't get into medicine, for example, try a biomedical sciences degree or something similar."

Holly is now so immersed in university life that she is even on the student committee for her course. Her proposal for peer assisted learning was accepted and chemistry students now help tutor that part of the course. "I'm making my mark," she said. She has also been impressed with the support offered by academic staff. "If you say 'can you help me?' to the lecturers, it's never a problem, they will always make time for you."

Mum, Alex, who has fond memories of her own time studying at Kingston's School of Education, was always confident that Holly would slot right in at the University in South West London.  "I knew Holly would be happy here and would really thrive on her biology and nutrition course." she said. "I was also pleased with the course she finally settled on because it would open up so many career opportunities for her."