Most fashion students keep their finished designs in a wardrobe; Emily Crane gets hers out of the deep freeze.

Emily, 22, is more likely to be found in a lab coat, wearing goggles and holding a Petri-dish than working with pencils or scissors; she's even been swapping ideas with the chefs at Heston Blumenthal's restaurant, the Fat Duck at Bray, in Berkshire.

Emily's work forms part of Kingston University's display at Vauxhall Fashion Scout on September 17, during London Fashion Week. Guests will be able to touch and feel some of the samples during the show at Freemasons' Hall in Covent Garden, London.

She is currently preparing her collection but can't promise what she'll be showing: "I never know exactly what something is going to turn out like in advance because the processes are still very experimental," Emily explained.  While her fellow students were putting the finishing touches to their garments in Kingston's fashion studios, Emily was working in a refrigerated trailer parked on her mother's driveway in Bath. Her younger sister, Felicity, was her model, while her father put his own degree in Industrial Art to good use by operating a bubble machine and acting as her assistant. 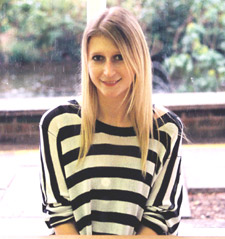 Emily, from Winsley near Bath, was drawn to Kingston to study for a Masters in Fashion by its reputation for encouraging innovative design. One of her first major pieces at Kingston was a dress grown from soap bubbles in her freezer. "The 'Bubble Dress' took just seven minutes to melt, so it felt really special to wear something that would only last for such a short time," Emily said.

As it was made from soap, the Bubble Dress wasn't edible; Emily had to find other ingredients. Most of her garments and accessories are now 'grown' from gelatine, seaweed and food dyes.

A big turning point for the designer came when she fortuitously discovered how her garments could drape over a body. "I was designing a dress which was half white and half black and experimented using a black food dye. The white side stayed solid, but the black side became soft. I realised that the glycerol in the food dye had completely changed the texture of the garment."

"We encourage our fashion designers to look over the horizon, to a world we don't yet know. Partnerships are crucial for the fashion designer of the future and Emily has teamed up with chemists, culinary experts and futuristic couturiers to underpin the scientific nature of the work she creates," Kingston University's MA Fashion course director Nancy Tilbury said. 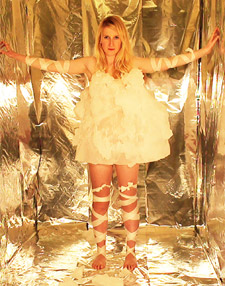 Speaking about her exchange of ideas with the Fat Duck, Emily said: "It was fantastic. Once I'd explained what I was trying to do, pots and pans came flying out. Everyone chipped in, saying 'try this', 'taste this', and there was a frenzy of activity."

"People always ask me whether I did Chemistry at A-level but, to be honest, I hated science at school," Emily admitted. "I'd have never dreamt that this is what I'd be doing now."

As for the future, Emily hopes to be able to sell her designs in kit form. "People would be able to buy packs which would include everything they need to cultivate their own uniquely tailored outfits," she explained. And does Emily foresee a day when dinner party guests will eat their own Michelin starred clothes? "Why not? Let the banquet begin."

To find out more about studying MA Fashion, click here