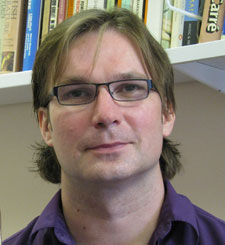 Buffy the Vampire Slayer and one of the world's foremost philosophers are among the wide-ranging interests of Kingston University's new professor of contemporary popular aesthetics.

Professor Matthew Pateman, 41, who joins after a 16-year career at the University of Hull, will be pursuing his research into the cult television heroine alongside a study of French post-modernist Jean Francois Lyotard. He will also teach courses in popular culture and perform administrative duties in his role as Head of the School of Performance and Screen Studies.

Professor Pateman said he first stumbled across the work of Lyotard as an undergraduate and believed he deserved further study because of his enormous contribution to the humanities. Lyotard, who died in 1998, was best known for his analysis of postmodernism.

He is equally passionate about the work of Joss Whedon, creator of the US television series Buffy and spin-off Angel, about whom he is writing a book. "I was a literary scholar when I fell in love with Buffy in a way that I had never fallen in love with any television show before," he explained. "Buffy not only had high production values, it had philosophical and moral aspects to it and complex characters that developed over time. It reshaped the popular landscape and was simply one of the most significant cultural phenomena that US television has produced in the last 30 years." Professor Pateman said that Buffy was ground-breaking, ushering in a wave of successful cult television series. "Without Buffy there would be no Wire, House, 24, Lost or Heroes," he said. 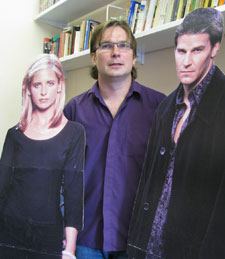 Some may view the study of popular culture as superficial or peripheral, he said, but he insisted it was a serious academic discipline. "Because television is seen as a leisure activity, some people will assume that there's nothing more to it than that. That's just wrong and ignores the sheer pervasiveness of the medium," said Professor Pateman. "Television has an enormous impact on our lives and culture and deserves to be studied in a critically reflective manner," he said. "The idea that it should not be studied is simply missing the point in spectacular fashion."

Professor Pateman completed his undergraduate degree, PGCE and PhD at Leeds University. He moved to the Scarborough unit of the University of Hull in 1994 and later to the main campus in Hull, where he worked his way up to become Head of Film and Media.  He said: "I was attracted to Kingston because of its ambition. I'd been in my current job for 10-15 years and it seemed a good time to move to a forward-looking, vibrant and exciting university."

After 30 years in the north of England, the move to a job in Kingston and a home in Surbiton has been a positive experience. "I just assumed the south was going to be full of grey and horrible buildings but it's open and lush and people are very civil and friendly."

Away from the university, Professor Pateman enjoys spending time with his four-year-old daughter Ellie, and watching cricket and football.