Squeezing ideas from the big wide world into one Tent 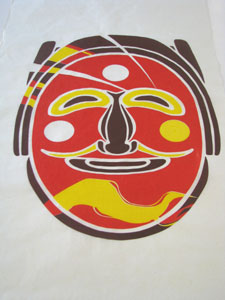 Students from the Faculty of Art, Design and Architecture have addressed a vast range of topics including the Haitian earthquake, the Korean War, assisted dying, throwaway fashion, and "the miscommunication, disorder and digital overload inherent in 21st Century life". This is the first time they are exhibiting at Tent.

This year's MA students have come to study at Kingston from 48 different countries, keen to benefit from the University's links with many of London's cultural institutions. The display, at Tent London in the Truman Brewery in Brick Lane from September 23 to 26, reflects the resulting exchange of influences. The work of 150 students, studying on 12 separate MA courses, will be on show, including fine art, film making, photography, graphic design, product design and illustration.

Dean of the Faculty of Art, Design and Architecture, Dr Simon Ofield-Kerr, said: "Our students, and UK design generally, will play a fundamental role in leading the way out of the current economic crisis and addressing the global challenges of our age. This exhibition demonstrates that Design students from Kingston University are tackling these issues head on."

Roisin Lafferty, 24, who is studying MA Design: Product and Space, drew inspiration for her project from a close friend, Donagh O'Riain, who died in August after seventeen years living with the rare wasting disease Friedreich's Ataxia. Two weeks before his death he told Roisin he wanted to die.

Roisin has constructed what looks like an ordinary bachelor's bedroom. But, once sealed, the room contains only enough air to allow the occupant to breathe for a little over six hours. The installation is designed to give the viewer the perception of being in an ordinary bedroom in an ordinary house. The user would go into the sealed room, shut the door and go to sleep with the intention of not waking up.

Roisin, who is from Dublin where the debate over assisted dying is acutely sensitive, said: "I want people at Tent to be able to go inside the room to experience the psychological effect of being in a room to die in. Only one person will be allowed in at a time."

At the beginning of August Roisin filmed Donagh arguing forcefully for the right to end his life. Soon afterwards he went into a coma and died naturally a few days later. Donagh's family have backed Roisin's project. "So many people wanted to ignore Donagh as he found it hard to speak," his brother Connor said, "but Roisin was completely different. She wanted to help him make the most of his remaining months of life. Some of his friends are coming to Tent to show their support for her - and pay their respects to Donagh."

Another designer, Younghwa Lee, will be exhibiting a door designed to fold over and provide emergency shelter after an earthquake; she believes it could save hundreds of lives. "It's so simple and credible it makes you wonder why it doesn't already exist," her course leader Colin Holden said. 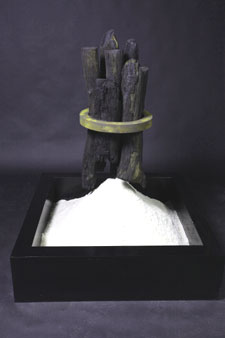 The University's three Fine Art MA courses have collaborated on a series of works inspired by a spam e-mail. The e-mail - 'Subject: in had and after' - was unintelligible, but Sophie Barr thought it had a strangely poetic feel to it and circulated it among her fellow students, many of whom were abroad during the summer break. The 'poem' seemed to capture the way people are overloaded by digital information - much of it unsolicited - and, Sophie said, the students used it to link up the very different projects they had been working on.

The way the exhibition had been assembled reflected the modern-day art school where students shared ideas online rather than in studios or workshops. Sophie has also invited the e-mail's 'sender' to Tent. "I've no idea whether he'll come, or even if he's a real person," she added.

"We are delighted to welcome Kingston University for the first time," the founder of Tent, Jimmy Macdonald, said. "Tent has always been committed to supporting design education and admires Kingston's strong reputation for producing designers across all disciplines."

To mark the occasion, the Design Museum is curating a vibrantly-coloured installation by Morag Myerscough of some of Kingston's star alumni, including Jasper Morrison, David Chipperfield and Gitta Gschwendtner. But Dr Ofield-Kerr believes visitors will leave talking about the class of 2010: "Being part of Tent and the London Design Festival puts our students and courses at the heart of the UK's creative industries, and makes them well placed to play their part in designing the future."

Find out more about postgraduate courses at the Faculty of Art, Design and Architecture.