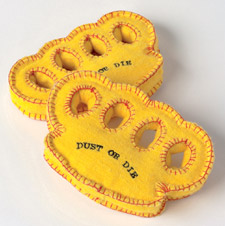 Two Kingston University MA students proved a surprise hit during the London Design Festival when they asked London's designers to reinvent one of the most mundane of household objects - a standard yellow duster.

Julia Jarvis and An Michiels sent invitations (and a duster) to 50 handpicked designers and also held an open competition through a design website.

During the past few weeks and months, the students have seen a sunglasses' case, a robot, a picture frame, an umbrella, a pair of baby booties, a portable seat, a bra and a pair of pants arriving in the post. "We chose the most banal everyday object to reveal the amazing creativity in London's design scene," An explained.

One of the most eye-catching designs came from Simon Sawyer. He turned the duster into a padded knuckle duster, complete with the logo 'Dust or Die'. Meanwhile Luxumi Sridharan and Demelza Hill both made dresses out of their dusters. Other designers, such as Gilles and Cecilie and Mel Bartheidel, used the dusters to create artworks that would sit comfortably on a living room wall. They exhibited the 100 best ideas at Tent London, one of the highlights of London Design Week, under the title 'Everyday Delights'. Visitors to their website can also buy a book of postcards. 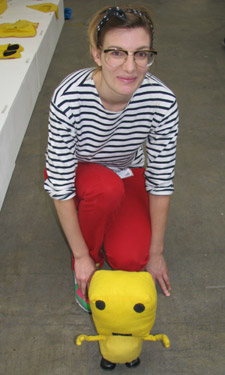 Julia and An met while studying on the MA Curating course at Kingston University. Londoner Julia had a background in television production; An, from Brussels, had worked for a decade as an architect. They graduated this summer and set up the JJAM Curators' Collective.

"The Kingston MA Curating Contemporary Design has produced a number of successful curating companies the latest of which is JJAM," course director Professor Catherine McDermott said.  "The course specialises in encouraging collaborative working and the yellow dusters are an novel and very clever way to showcase not only An and Julia's new collective but also some of London's best creative talent."

Despite being located in the furthest corner of the Truman Brewery, the venue for Tent, JJAM's stand attracted a steady flow of visitors. One particularly popular character was Duster Monster, an eight inch high robot designed by Rob Francis.

After making such a splash with their first exhibition, what are Julia and An planning to do next? "I really don't think I should tell you," An said, "but look out for something around Christmas time."