The 55-acre site, owned by the University, now boasts a brand new two-story pavilion with 14 changing rooms, a first-aid room and a large social area. New cricket squares and improved facilities have also been added to the site's 14 football pitches, two rugby pitches, and a floodlit, multi-use, hard-court area for netball, tennis and five-a-side football. 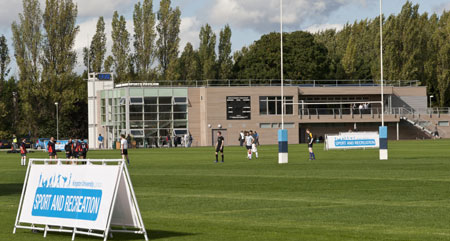 Director of Sport and Recreation for the University, Phil Muschamp said it was fantastic to be able to offer such a facility to offer to both students as well as the local community. "It fits right in with our strategy to widen participation in sports and physical activity," he said. "We are really keen to develop sporting excellence and build strong community links."

The new pavilion took one year to build, at a cost of £2.65 million. Designed to suit both able-bodied and disabled users, the building uses various green technologies including a ground-source heating pump and solar thermal heating panels. 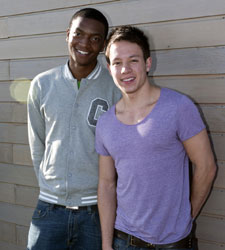 Kingston students Roddy Cole (Sports Science, left) and Jordan Gibbens (Sports Analysis and Coaching, right) are keen footballers. "We've got eight men's football teams and one women's team at Kingston so it's great to have 14 changing rooms all with their own showers," Roddy, who is also President of the University's football club, said. "Colleges and sports academies come here to play which we think will attract students to Kingston and that will help us find better players."

The Mayor mingled with guests before unveiling a framed photograph of the pavilion, aided by Director of Student Services and Administration Bruce Armstrong and Pro Vice-Chancellor Neil Latham. "Sport has really taught me some essential life skills - how to work in a team, confidence and competitiveness," Mayor Hitchcock said. "I believe this new space will encourage more people to get involved in sport which can only be a good thing." 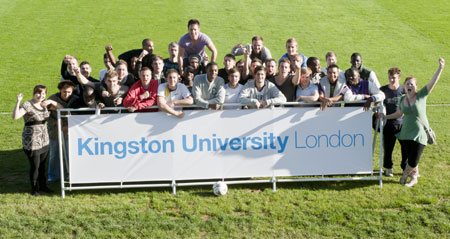