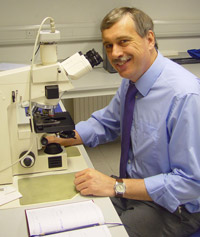 A biochemist who was involved in ground-breaking research into the treatment of diabetes has been appointed as Kingston University's new Deputy Vice-Chancellor.

Dr David Mackintosh, 53, began his career at Guy's Hospital where he worked on the first clinical trials on the use of human insulin. Essex-born Dr Mackintosh, the first person in his family to go to university, joined Kingston University as a senior lecturer 21 years ago and is currently Dean of the Faculty of Science. He will take up his new role on November 1 when Professor Mary Stuart leaves to become Vice-Chancellor of the University of Lincoln.

Dr Mackintosh admitted he hardly slept the night he discovered he had got the job of Deputy Vice-Chancellor, which involves general management of the university. "My head was buzzing with the possibilities," he said. "I want to build on the work Mary Stuart has done on improving the experience of our students at Kingston." This could include extending the personal tutor system and spending more time listening to students' needs.

He rejected the CBI's suggestion that students should pay more for their loans. "My generation received a free education and while that would be the ideal, the size of the sector means that's never going to happen again. The recession and the squeeze on the public purse have created further difficulties but the cost of studying for a degree should be kept to a minimum and should never be a barrier to those students who are keen and capable of benefitting from higher education." He conceded however that the cap on fees was likely to be raised. 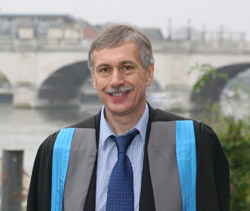 Dr Mackintosh also rejected recent claims that the university sector was complacent about standards but did agree that it sometimes appeared to be and said it needed to do more to convince its stakeholders and the public that its standards were robust. He supported the Government's aim of wanting 50 per cent of young people to go to university "but for that to be realistic it has to refer to higher education in the widest sense, which may mean a foundation or part-time course rather than a degree," he said. He added that Kingston was well-regarded as a university that was committed to helping students from a diverse range of backgrounds but said he was keen for it to be equally well known for its research.

Kingston University's Vice-Chancellor Professor Peter Scott: "I am delighted David has accepted the job of Deputy Vice-Chancellor. Although Mary Stuart will be a hard act to follow, David has been an exceptional leader of the Faculty of Science and has played a key role in some very important university-wide initiatives. I very much look forward to working even more closely with him in the future".

Dr Mackintosh was born and brought up in Elm Park, near Hornchurch in Essex. He wanted to be a scientist from the age of seven: inspired by his father, a welder with a passion for science. His interest in molecular biology developed in his teens after he read Michael Crichton's The Andromeda Strain, a novel about a team of scientists investigating a deadly microorganism. After a first degree in biochemistry at the University of Kent, he went on to do a doctorate in diabetic kidney disease and worked as a researcher at Guy's Hospital Medical School, Charing Cross Medical School and West Middlesex Hospital before joining Kingston University.

Outside work Dr Mackintosh's time is spent with his children aged 14, 12 and nine, playing badminton and swimming. He has a long-held dream of learning to fly, adding: "With this new job, I guess that dream will have to wait a bit longer to realise."