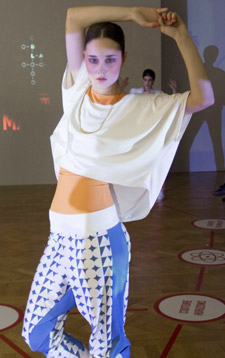 It's a firm favourite at children's parties up and down the land. Now the game musical statues has had an image makeover - becoming the inspiration for a sportswear collection that has burst on to the catwalk courtesy of up-and-coming designer Niamh O'Connor.

One of the first graduates from Kingston University's new MA in Fashion the 23 year old from Aldershot has drawn on a fascination with the dance culture of the 1990s for her new range. Unveiled during London Fashion Week, the sports couture, created for her final course project, has been designed to inject a high energy yet easy-to-wear element into wearers' wardrobes.

A passion for people-watching helped Niamh come up with the concepts for her line-up of eight outfits. "I've always been intrigued by everyday human gestures, mannerisms and expressions and my fashion studies at Kingston University have made me think even more about the way people move and how clothing can change or hinder that," she said. "Every action we make and every direction we take has a consequence and an impact on our lives and I was keen for my collection to reflect the way we all move to our own individual beat."

Niamh also attributes much of the influence for the range, simply called NOC, to her own experiences growing up in the 1990s. "I was very aware of the music scene and the feeling of escapism that influenced dance culture," she explained. "I wanted to capture that sense of freedom and exuberance in my collection and many of the outfits are reminiscent of clothing I would have worn myself as a child."

Drafting in friends to strike a variety of poses, Niamh started developing the range by looking at ways she could reflect the silhouettes they created as they stretched and bent their bodies. "I spent a lot of time experimenting with the cut so that I could incorporate the different shapes I observed directly into my garments," she explained. Created from a combination of lycra, silk, suedette and denim, the dresses, jackets, tops, leggings and shorts that make up the final collection couple exaggerated shaping and digital draping with a kaleidoscope of colourful print. 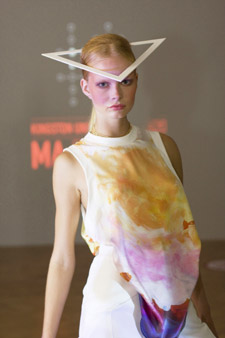 Niamh admits she chanced across the neon colour scheme that tops off the more traditional sporting white underpinning the range. Using body paint to capture the effects created by different movements on paper, she eventually settled on a flamboyant flourish of orange, bright blue and fuchsia pink. "I deliberately set splashes of bold colour into hidden folds of white jackets to give an unexpected edge to the garments as wearers extend their arms. I also used a lot of ribbing with a strong geometric pattern to give some of the more vibrant dresses, tops and leggings extra impact," Niamh said.

Focusing on the way fabrics interact with the body's contours has been a pivotal part of Niamh's year-long Kingston University MA Fashion studies. After graduating from Birmingham City University with a BA (Hons) in Fashion, she opted to complete her MA at Kingston because of the course's emphasis on using the latest advances in science, engineering and technology. "I've really enjoyed the more detailed research aspects of the Kingston MA Fashion which have made me think more deeply about the ideas behind the clothing that ends up on the catwalk and in our wardrobes," she said. "The course has reinforced my belief that there's never simply one way of looking at a garment or a situation and I definitely feel this broader outlook has helped me mature as a designer."

The rising star's collection stopped trend-spotters in their tracks at Kingston University's Faculty of Art, Design and Architecture MA Graduation Show last week. It created a similar stir when it was unveiled in front of a horde of industry experts, buyers and journalists as part of Vauxhall Fashion Scout activities promoting the work of fledgling designers during last month's London Fashion Week. "I could hardly believe my collection was being launched in front of executives from major brands such as Burberry, Pringle, Stella McCartney, Calvin Klein, Philips and Nokia," Niamh said. "That's something most young designers can only dream about."

Course director Nancy Tilbury said Kingston's MA Fashion was committed to encouraging students to think more progressively and make the most of key industry links with science and technology brands. "Sportswear has undergone a renaissance in recent years with a shift away from staid, traditional uniforms to garments which not only reflect individual players' and athletes' personalities but work with their bodies to optimise performance levels," she said. "Niamh has produced a truly contemporary collection that displays enormous energy and really keeps pace with the momentum of the fashion marketplace."

Having made her debut in one of the world's major fashion capitals, Niamh now has her heart set on one day working abroad. She is also eager to focus more on the links between fine art and fashion and collaborate with leading sports brands. "Whatever happens, I'm sure having an MA from such a highly respected university as Kingston will stand me in excellent stead," she said. "I've really grown in confidence during my studies and know my qualification will help give me the edge entering such a highly-competitive industry." 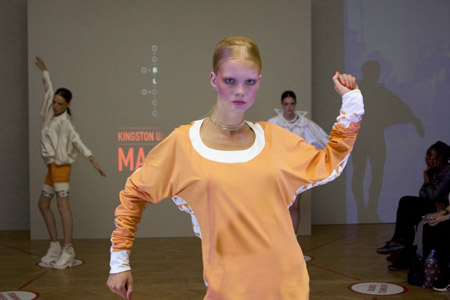