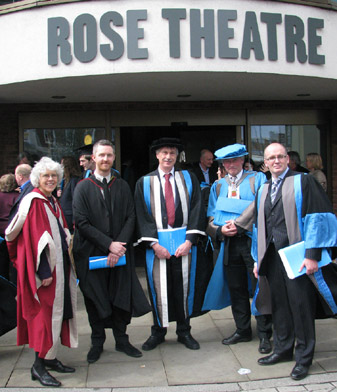 London's creative industries have bounced back from the recession according to one of the city's most influential designers.

Peter Bishop, who has just stood down as deputy chief executive of the London Development Agency, was speaking after being awarded an honorary doctorate by Kingston University. He describes himself not as a planner, but as a "shaper of cities", having influenced the Canary Wharf development, the BBC's White City Media Centre and the new development of King's Cross. He also works as an adviser to the civic authorities in the Romanian capital Bucharest.

Mr Bishop received his honour from the University's Faculty of Art, Design and Architecture in a ceremony at the Rose Theatre in Kingston. "Architecture and design touch the lives of all of us," he told an audience of more than 700 students. "The cities that look after their public spaces, care about their new buildings and preserve their historic fabric will thrive. I've just attended a big property festival in Cannes and I came back feeling very positive about London. I'm confident it'll continue to be a place where great designers are given the freedom to create great places."

Peter Bishop set up Design for London, the Mayor's architectural organisation in 2006. "Design for London has the luxury of being able to think about what makes the capital unique," he said. "It devises big strategies for change and works with local communities to shape their neighbourhoods and improve people's lives." 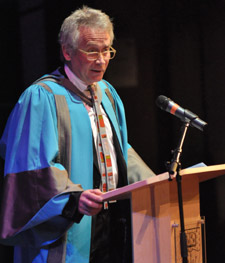 The Head of Kingston's School of Architecture and Landscape, Daniel Rosbottom, described the unique opportunity that Kingston's architecture students have had in working with Design for London over the past two years on the East London Green Grid and High Street London. He said he is looking forward to the relationship continuing in years to come. "Under Peter's leadership the students have really engaged with what architects do. They have benefited hugely from the opportunity to work with the key design strategists for London, allowing them to play a part in thinking about the future of our city, but equally, I know that Design for London have appreciated the breadth and innovation of their ideas and research."

Mr Bishop said he hoped the honorary doctorate would enable him to build stronger links between academia and architects and designers currently working on projects in London. He had previously worked for four London Boroughs before moving to Design for London and, then, the London Development Agency. "I am working with the mayor on his Design Advisory Committee, have a book being published later this year called The Temporary City, I've taken on a directorship at an architects' practice and am doing some university lecturing," he said.

"I hate it when people ask me what I do for a living. I have to say 'Well, have you got half an hour?'"