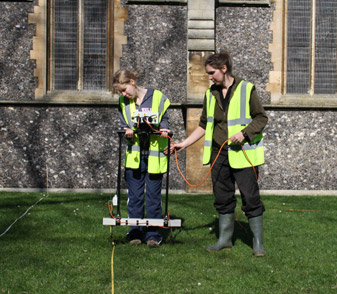 An archaeological team from Kingston University in South West London has gone beneath the surface of the historic churchyard at the borough's All Saints Church to try to find out more about its history. The team carried out a full scientific survey of the site in the heart of Kingston's town centre, with local people and school children also taking the opportunity to get involved.

A church has stood on the grounds for well over 1,000 years and is of great historical significance. It is widely believed to be the site of the crowning of at least two Anglo-Saxon kings, and possibly as many as seven, during the 10th Century, including Athelstan, the first king of a unified England in 925, and Ethelred the Unready in 978-9. Nothing remains above ground of the original Saxon church except for outlines marked by stones outside the south door of the present building.

Dr Helen Wickstead, an archaeology expert from the University, and her colleagues used an earth resistance meter to survey the entire graveyard. The device measures the resistance the weak electrical current it produces encounters as it passes through the earth. The results mean that a two-dimensional image can be created of exactly what lay below ground.

Dr Wickstead was asked by the church to carry out the survey ahead of redevelopment work. "We discovered three possible brick vault structures but have no idea who was actually buried there. Usually they contain coffins of members of a family in an underground chamber," she said.  "We know exactly where these vaults are now and we're hoping to use the documentary evidence available - historical maps, church records and aerial photographs - to find out who was laid to rest there and precisely when they date from.  It would be fascinating to find out their stories."

Students from Kingston University's MA in Museum and Gallery Studies and BSc (Hons) in Forensic Science took part in the project along with pupils from Nonsuch High School for Girls in Cheam. Local people also had the chance to get involved during the weekend of exploratory activity. 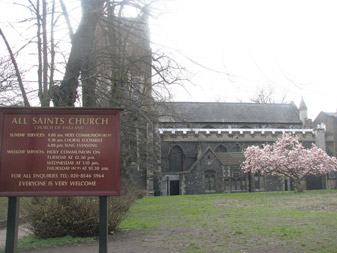 "Several passers-by came along and showed a real interest in what we were doing," Dr Wickstead said.  "Some of the mapping was actually done by interested people who just happened to be out and about in Kingston on the day. From that point of view it was also a huge success and the school children and students involved really enjoyed it and learned a lot.  We got to make some new discoveries and gave people the opportunity to explore archaeology and geophysics in a way they wouldn't normally do."

Vicar of All Saints Parish Church Reverend Jonathan Wilkes said he had been delighted to work with the University on the project.  "An important element of our redevelopment concerns the heritage the site holds and represents, so gaining a deeper understanding of what's below the surface will inform and educate us as we move forward," he said.  "We're particularly interested in what the survey tells us about the site of St Mary's Chapel which lies to the south of the current building and which is only acknowledged now by plaques that mark where the walls would have been. We were really pleased that through this open event Helen and the university team were able to bring archaeology to anyone who was in the town on those days. This approach is something that we hope to develop further in the future."

Leah Rogers, 23, who is originally from New York and currently completing the Museum and Gallery MA at Kingston University, said she had got a lot out of taking part.  "One of my major projects at the moment involves deciding what a hypothetical museum focusing on Kingston would look like in 2030," she said.   "Being from the United States originally, it was fascinating to get an understanding of one of the borough's heritage sites and how important it might be to local people in the future.  This ended up being a great example of community participation. People were very curious about what we were doing, especially when they saw us holding the earth resistance meter, which looks a bit bizarre if you haven't seen one before."

Following the success of the All Saints project, final year forensic science students from the University will be taught the practical part of their forensic archaeology module at the church.