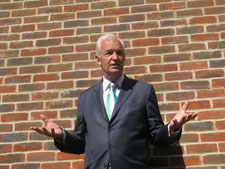 Channel Four News anchor Jon Snow shared tips about reporting on revolutions with Kingston University students at a guest lecture this week (Wednesday 4 May 2011). The award-winning journalist gave a talk entitled Revolution - are we entering a golden age of journalism? The audience heard from Mr Snow about what it had been like to be in Iran as a young reporter at a time when news footage would be flown back to the United Kingdom and aired two days after it was filmed.

Mr Snow also spoke about the contrast between covering the protests in Egypt this year. He argued that the use of Twitter and mobile phones had transformed the way he was able to cover revolutions as they meant he could keep in contact with protesters and arrange follow up interviews.

The journalist, previously ITN's Washington Correspondent and Diplomatic Editor, explained how reporting had changed during his career but said that the one-to-one relationship between the presenter and the viewer remained crucial. While some television news crews used a "scrambled egg" approach with images from over 30 different cameras, Mr Snow said he preferred only to use images from the camera crew he was with.

Journalism lecturer Maria Ahmed, who organised the event, said: "This was a fantastic opportunity for students to meet one of the most incisive and influential journalists working in Britain today."

Kingston offers a range of courses in both undergraduate and postgraduate journalism.