Athletes who have taken banned drugs but deny having done so are likely to manipulate their answers on questionnaires to make themselves fit the image of someone who is 'clean' and strongly anti-doping, according to new Kingston University research.

In the study, funded by the World Anti-Doping Agency, a team headed by Professor Andrea Petroczi from Kingston's School of Life Sciences surveyed 82 athletes competing at various levels on an anonymous basis. They found patterns in the answers of those who denied using any prohibited performance-enhancing drugs which indicated they were deliberately trying to cover their tracks. "This has major implications for research where the aim is to establish the reasons why athletes take illegal drugs since the vast majority of such studies are based purely on questionnaires," Professor Petroczi explained.

The athletes' self-declared 'clean' status on the questionnaire was checked using hair analysis - those taking part were asked to provide a hair sample which was tested for commonly used anabolic steroids, erythropoietin (often known as EPO) and major recreational drugs. "Having the opportunity to combine social science techniques with analytical chemistry in this way was a real advantage and it's an approach we will definitely be using again," Professor Petroczi said. 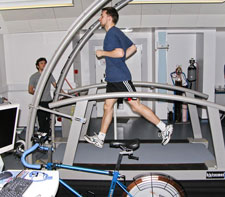 "The really interesting group included those people who denied using any drugs but then tested positive," she said.  "This group appeared to have manipulated every aspect of the questionnaire they filled in to fit the typical profile of what they thought would be a non-user." The athletes were asked questions about their attitudes towards doping, such as how much pressure they felt to take performance-enhancing drugs.  Professor Petroczi's team found distinct patterns in responses suggesting that they had faked their answers in accordance with how they believed someone who was 'clean' would have replied.

The athletes were also asked to complete a brief computerised word-sorting task using a concept known as the Implicit Association Test (IAT). This was designed to look like a game but was actually used to work out the athlete's attitude to banned substances.  Participants were asked to sort a mix of doping-related words, vitamins and foodstuffs, and words representing 'good' and 'bad'  into categories as quickly and accurately as possible. Professor Petroczi said it was much more difficult for athletes to cheat on this test. The difference in how quickly people could complete the various combinations required was revealing in terms of how uppermost these concepts were in their minds.

"Large-scale doping behaviour research needs to change because the clear message is that you cannot trust what individuals say about themselves on questionnaires - just because it's anonymous doesn't mean people will be honest," Professor Petroczi said. "People may be deliberately lying or even unwilling to admit things to themselves. This whole field would benefit greatly from using different research methods - for instance by using such indirect approaches as the IAT computerised test which has alternative measures that go beyond questionnaires completed by individuals."

The World Anti-Doping Agency (WADA) provided more than £25,000 towards the study. "WADA welcomes research that helps in the fight against doping in sport. We expand our knowledge-base from a wide variety of sources, and research like this is extremely useful," WADA's Director of Education and Program Development, Rob Koehler, said.

Further research will now be carried out to help refine the methodology and Professor Petroczi will also be developing the computerised word-sorting test. "The hope is that in future this could lead to better ways of identifying why athletes take drugs, which in turn could help put a stop to doping in sport," she said.