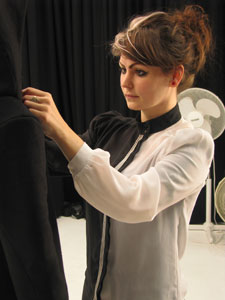 The student protests in London in 2010 triggered angry clashes between demonstrators and police and propelled the issue of higher tuition fees to the top of political agenda. Now, a student at Kingston University has used the marches as a source of inspiration for her latest fashion collection.

Loz Winney, 26, took part in two protests in the capital and at one point was part of a group that was penned in, or kettled, by police. It was then that her attention was drawn to some of the demonstrators who were dressed in black from head to toe, including hoods, scarves and ski-masks to cover their heads and faces, while they were protesting. Afterwards she watched as they took off their black outer garments and blended seamlessly into the crowd.

"I wasn't involved in any kind of violence at all - in fact I really went along to photograph the march - but I was very aware of police helicopters filming us overhead," Loz, from Cardiff said. "There were CCTV cameras everywhere and when we were kettled there were police officers trying to take pictures of everyone's faces. It led me to come up with the idea of 'social armour' - a way the individual can protect his or her privacy." 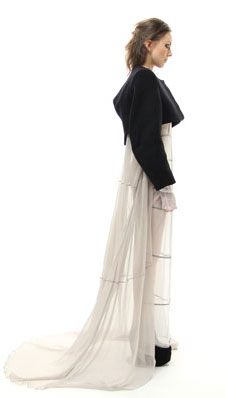 The outfits in Loz's womenswear collection all have two layers. The outer garments are made from tarmac black wool or cotton and designed so the wearer cannot be easily identified - several are hooded and some reach down to the ankles.  Those underneath are close-fitting and knitted from delicate yarns in soft greys and silvers. Loz has also incorporated chiffon, rubber panels and silk meshes. "I've been learning how to join knitwear to rubber. You have to use three different types of glue," she said. "The inner layer is about showing yourself for who you are and not compromising your beliefs," explained Loz.

"Loz really is the whole package - she's got the talent and the work ethic," Kingston University fashion lecturer Jo Baker said. "She uses shapes that are very contemporary and she cleverly replicates them throughout her collection."

Loz has been using her design talents in other ways too. She has been busy editing fashion blog DryCleanOnly, which was chosen by Vice magazine to be part of its blogging network, with three of her Kingston coursemates. She has also  helped out backstage at the past two London Fashion Weeks after being recruited by designer Louise Gray.