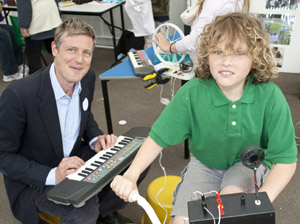 Families from Kingston in south west London are getting involved in a ground-breaking project to reduce the amount of energy they use. Around 500 households and a primary school in the north of the borough are taking part in the Smart Communities project, led by a team of researchers from Kingston University, which aims to help them reduce their energy consumption and save money by measuring their usage against that of their neighbours.

"We believe Smart Communities is the first project to work with a specific community to encourage people to come together to change the way they do every day things to save energy," project leader Dr Ruth Rettie, from Kingston University's Business School, explained. "The project taps into the potential for change that becomes possible when local people work together towards a common objective, with support and advice."

Smart Communities was launched by Richmond Park and North Kingston MP Zac Goldsmith at a tea party at Fern Hill Primary School on Friday 27 May. Children from the school will be taking part in the project both at school and at home, along with their families and other households in the area. "Energy prices are going to rise, and for economic, political and environmental reasons we cannot continue to use it at today's rates," Mr Goldsmith said. "Smart Communities is a fantastic project that will help people think about their energy usage and reduce costs in the home, and I'm delighted to have helped launch it." 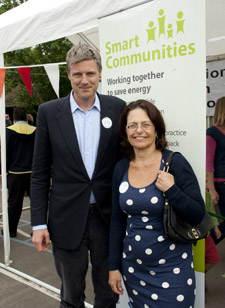 Fern Hill head teacher Diana Brotherston believes the initiative will spur her pupils on to become energy-efficiency enthusiasts. "The children are just as important as the adults - they'll be going home to their parents, and sharing ideas about how to use less energy," she said.

According to Dr Rettie, the school will help to promote 'energy literacy' among children and their parents. "The children will monitor usage at school and take part in energy experiments to see how, where, and when they're using energy," she explained. "They'll also learn how changing the way they cook or wash, for example, can help to reduce the amount they use and will see which changes have the biggest impact."

As well as measuring energy use in school, families involved in the project will receive monitors to record their household electricity and gas consumption on the Smart Communities website, where each household will have its own page. They will be able to compare their own consumption with the community average and pledge to try out new energy-saving ideas. They will also be able to share tips on cutting bills through an online discussion forum. Tudor Drive library will be hosting a gadget library, where local people will be able to borrow items such as shower timers, plug monitors and books about green behaviour.

The three-year project will be led, as much as possible, by the people in the community, supported by researchers from Kingston and other project partners, Dr Rettie explained.

The research builds on the CHARM project, which looks at the potential to 'nudge' people into changing habits related to issues such as climate change and health simply by telling them what others are doing. Smart Communities takes this idea one step further, examining whether a whole community can be encouraged to adopt greener practices in this way.