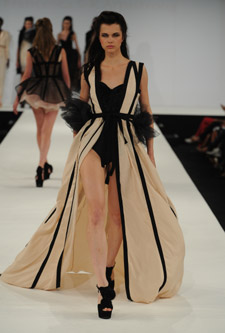 What will prove to be the must-have handbag this summer? A cheeky little number from Gucci? A sophisticated accessory from Prada? Or maybe a metal birdcage?

Three traditional budgerigar cages form part of a new collection by Francesca Armstrong from London's Kingston University. "The cages work just like handbags," the young designer explained. "You can open them up and put things in them. But they also reflect one of the main themes of my final-year collection."

Entitled The Ugly Duckling, the collection made a splash at the Kingston catwalk show during Graduate Fashion Week. Francesca from Guildford has used her childhood experiences of struggling to fit in with other youngsters as inspiration for her luxurious womenswear range.

"I'm half-Chinese and so I stood out a bit at my school which was quite conventionally English," she said. Fashion became the 22 year old's escape as she learned that being different could be an asset. Her latest collection represents her personal journey towards feeling comfortable in her own skin - and spreading her wings.

"The cages symbolise the sense of being trapped, or alienated, that many teenagers feel. But - as other people are able to see what you put in them - they also portray the freedom of accepting yourself for who you are," explained Francesca. 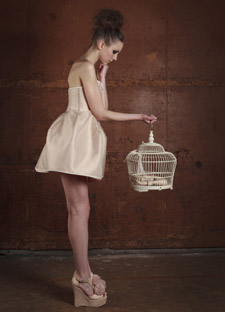 As a former model - Francesca was represented by Europe's largest agency Models1 for four years - she might seem an unlikely 'ugly duckling'. "I certainly hope people won't find the collection ugly," she said. "I've used flowing silk organza in black and ballerina pink and used traditional bonework to give the outfits structure. But it is imperfect. I've hand-painted the silks and very deliberately chosen birdcages that don't look as though they were mass-produced.

"Models are beautiful - but modelling is an ugly industry. That's what this collection is all about - ugly beauty."

After leaving university, Francesca hopes to set up in business as a designer. She has already visited factories and suppliers in China and Thailand and hopes these trips will influence her future designs.