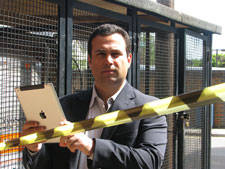 In the aftermath of the London bombings mobile phones and radios stopped working making the already tricky rescue operation even more difficult. Now experts from Kingston University have developed a solution to ensure breakdowns in communication are a thing of the past for emergency workers responding to disasters.

A team led by Dr Christos Politis has designed a sophisticated, internet-based technique to keep rescuers and their central control room in touch independently, rather than using central wireless access points or the TETRA police radio system. The app, which can be used on an i-pad or other personal digital assistant (PDAs), will also allow emergency service workers in the United Kingdom to talk to counterparts across Europe on a secure system.

"This research looked at how we communicate in a major disaster or emergency," Dr Politis said. "When there's a major terrorist event, earthquake or forest fire, traditional phone lines and radios often can't cope and tend to jam because of the volume of calls and other multimedia traffic, like video. Using our new application, emergency service staff will be able to communicate on their own autonomous network using any available smart device without having to rely on a central communication system." 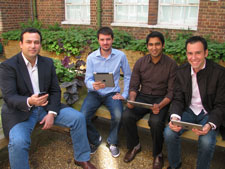 The research, funded by the European Union's PEACE project, built on existing work into mobile networks, known as MANETs. These are networks of mobile devices which work independently and are connected by individual wireless links. Rather than connecting through an external internet network, the new technique allows rescue workers to set up an independent communication system designed for their specific purposes at the scene whatever the situation or location - be it an underground tube station or next to a collapsed office block.

The design allows one of the mobile devices carried by a rescue worker to act as the super-node - a bit like a mini satellite - letting other mobile devices communicate with each other. As soon as a device passes a virtual intelligence security-check, it can start to find others in the location. Each worker can then talk or send video or data to individual workers or entire groups. 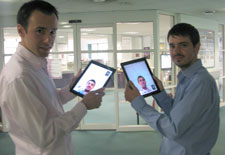 By installing our app the devices can also be used to work with new sensors being created by research partners in the PEACE project. "In the future the technology will also be able to act as sensors and pick up humidity levels, workers' heart rates, temperatures, movement and pass these on to a central operator," Dr Politis said. "These statistics can then be checked by central control workers who can advise crews if they need to get out if it is getting too hot for example." Important buildings such as government buildings and tube stations may have permanent sensors in the future.

Dr Politis and his team believe their invention offers huge potential in the aftermath of terrorist events and natural disasters. "If the application takes off then in the future it could transform the way rescuers search for survivors in an earthquake," Dr Politis, a former telecoms engineer who served in the Greek airforce, said. "We could see an emergency button you could press on your smart phone if you were trapped under rubble and this could send your co-ordinates to rescuers' devices without you even having to call 999."

The Kingston design recently won backing from emergency service experts at a European-wide conference in Portugal. The team has also liaised with the Internet Engineer Task Force (IETF), an international community of internet professionals who work to advance internet architecture, as the application has been developed. The Kingston prototype will now be refined and could be rolled out to emergency services within two years.

Find out more about the campaign by joining the Universities Week Facebook fan page. For national Universities Week media inquiries, please contact: Elizabeth Porter by email at elizabeth.porter@kindredagency.com, or telephone: 020 7010 0851.