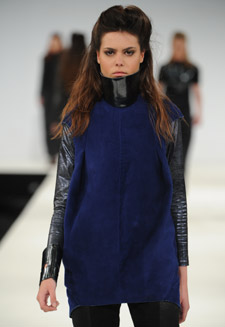 The daughter of a senior government minister has designed a set of outfits for powerful women. Kingston University fashion student, Alicia Duncan Smith, whose father, Iain, is Secretary of State for Work and Pensions, premiered her collection at Graduate Fashion Week at London's Earls Court 2.

Alicia's looks use heavy fabrics, such as wool and leather, which emphasise the status of the wearer. Each outfit incorporates a distinctive set of shaped shoulders - a useful attribute in politics.

"This isn't the Dynasty look. These are New Age Power Shoulders, without a hint of polyester in sight," 22-year-old Alicia said. "The high, slanted shoulders merge into high collars which give the wearer a sense of authority." She has retained the slanted shoulders in all the looks in her collection.

In keeping with the theme of women who won't stand for any nonsense, Alicia has eschewed feminine pinks and yellows and focussed on business-like black, grey and navy throughout the collection.

"I started wanting to use a lot of blues," she said. "But as the collection developed, it became more masculine and grey seemed more appropriate." 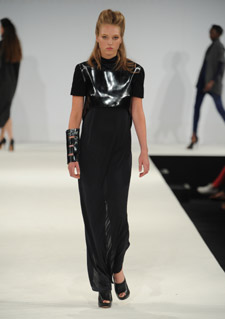 While studying at Kingston, Alicia has been able to take up several placements within the fashion industry, including at Burberry and Markus Lupfer. In her second year, she secured a two month paid internship at Banana Republic in New York by winning a competition which the University stages each year.

She was one of 24 final year fashion students at Kingston who were selected to display their collections at Graduate Fashion Week. Father Iain attended the show along with other family members.

"The muse behind the collection is my mother," said Alicia. She's been able to cope with everything that's been thrown at her - which, when your husband becomes party leader and a cabinet minister, is quite a lot!"