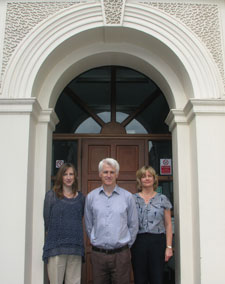 Government spending cuts and restructuring are threatening important records held and displayed by archival and heritage institutions, according to Kingston researchers. Academics from Kingston University, London, warn the rise of online commercial companies providing access to records is restricting their full educational and research potential. A team from Kingston has now set up the Centre for the Historical Record to help counter this trend and boost interest in public history. The new centre, which officially opened on June 10, will look at how public history should be preserved for future generations.

Local councils are currently being asked to make savings by central government and many libraries and archives are expected to be affected, Dr Nicola Phillips a historian at Kingston University, said. "Grants to heritage organisations have also been reduced as part of the government's spending cuts, providing an opportunity for commercial companies to snap up the rights to archive data," she added. But academics fear that archive material stored on such commercial websites is currently more geared to people looking to investigate their family trees rather than academics looking at more depth trends such as occupations or migration. They are also concerned about the public being charged to view public history.

"We are faced with a growing number of websites where users have to pay for documents which I think is bad for history," Dr Phillips said. "On radio, television, online and in print, history has never been so popular and yet government cuts and restructuring are threatening both archival and heritage institutions as well as the records they hold and display. Commercial companies are providing access to records to many thousands of genealogists, yet in doing so they are restricting the full education and research potential of other users."

The centre aims to highlight the pros and cons of digitisation to archivists and experts looking after historical collections. Kingston University's Dr Sue Hawkins, who has led projects to digitise medical records, believes that although the process can make data more accessible it also had other consequences which archivists need to be aware of. "Computerising data has some advantages in that people don't have to go to a central office to look at information anymore, they can do this from the comfort of their front room," Dr Hawkins said. "The down side is that once this service is available the number of visitors to an archive falls and this can have the knock-on effect of leading to a reduction in funding."

History groups have so far been quite welcoming to commercial websites who will pay to digitise their records and offer Royalties, according to Dr Hawkins. "It seems like a good deal at first but there tends to be an initial interest when the new archives are first uploaded and then the Royalties drop," she said. "These are some of the dilemmas of digitisation. It is not always the fairy godmother that archivists thought it was and there needs to be more discussion about how it is done."

Researchers hope the new centre will be a place to share information, discuss potential problems and find solutions to preserving historical records effectively - making organisations think before signing their archives over to commercial websites. The centre will also host debates about how providing accessible history for the public causes tensions when that information is usually considered private, as is the case, for example with mental health records.