From the Henry's smiling face to the Dyson's bagless technology, every so often a vacuum cleaner comes along that captures the public's imagination. Now a design student at Kingston University in London hopes he's come up with the latest success story.

The unique selling point of Ben Fursdon's Broo-ver is its simplicity. "I visited a municipal tip and there was a guy who worked there who had set up his own business repairing and selling on vacuum cleaners," explained the 23 year old who's just completed a degree in Product and Furniture design. "He told me that more than half the vacuums that were brought into the tip simply needed a need belt, a new filter or a new fuse. So my starting point was to design something as straightforward as possible.

"The Broo-ver has no belt and no bag and the filters are much more easily accessible place than in traditional vacuums so it isn't difficult for the owners to take them out and stop them getting clogged," added Ben from Teddington, just over the river from Kingston. 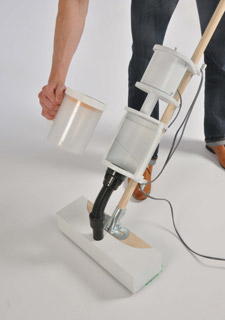 "It's part-vacuum and part-broom. There are three adapters that go over the bristles on the brush - so people can use it on hardfloors, carpets or on surfaces where there's lot of pet hair. So many vacuums break because they get clogged up by dog or cat hair."

How did he come up with the name Broo-ver? "Well I'd love to pretend it was a really clever word in Latin but, actually, it's a combination of broom and hoover."

Ben's interest in sustainable design also prompted him to build a composting device to fit on high-rise balconies, complete with worms to speed up the process of turning food waste into compost for tomato or strawberry plants - which could also be grown on the balcony. He's now looking for a job with a design agency in London. Both projects will be on display at New Designers at the Business Design Centre in Islington, London from July 6 - 9.