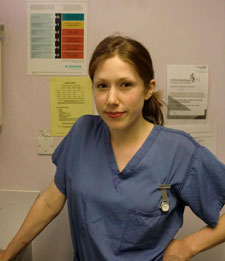 A design for a special vibrating alarm which could allow nurses and healthcare assistants to identify exactly where a call from a patient is coming from has won a top prize at a competition for entrepreneurial students.

Helen Anderson, 25, who has just completed a nursing diploma from Kingston University and St George's, University of London, developed the idea as an alternative to noisy buzzers, which can often irritate and upset patients.

"I was on placement on a neurological ward as part of my course when I noticed that several minutes were being wasted when nurses had to try to locate a call bell," Helen said.  "This led to embarrassment and patients being interrupted as staff entered the wrong areas trying to track down the source of the call."

Helen's concept, which won her a prize of £1,000 in the WestFocus Bright Ideas Competition, is for a portable call locator system to equip nurses and healthcare assistants with miniature pocket-sized vibrating pagers with a display indicating the precise call location.

Traditionally, nursing-station based call bell locating devices have been used in hospitals but checking these usually meant that a nurse might have to deviate from another task.  Also, during busy hours, there might be other team members blocking the locator.

Helen started her first nursing job at Homerton hospital in East London straight after graduation.  Her course tutors at the two institutions' Faculty of Health and Social Care Sciences say her success has come as no surprise.  "Helen developed her idea as part of her year two coursework and was encouraged to take it forward as many nurses find identifying calls time-consuming and, at times, upsetting for their patients," Ann Kettyle, a senior nursing lecturer, said.  "Her idea is the perfect way to help improve patient care by reducing the amount of time people they are caring for need to wait for a nurse to respond to their call."

Helen is now in talks with St George's Hospital in London about the possibility of developing a trial of the portable system.  "Winning the prize is a great boost but I really hope that my idea can start being used on wards," Helen said.  "When you're on a busy ward, time is so limited and you're under pressure so it could be a real help.  The hope is that when nurses are not busy with other duties it can help them take even better care of their patients."

Helen was among 23 winners at the 2011 Bright Ideas competition.  The competition is in its seventh year, and is open to students at seven universities in London.

"Each year we get more entries, and the ideas become better and more diverse.  Like Helen's concept, they often address genuine needs," Martha Mador, Head of Enterprise Education at Kingston University and manager of the WestFocus Entrepreneurship Centre, said.