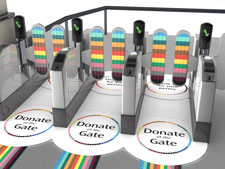 The days of charity workers shaking buckets or collecting tins could be over - two Kingston University students have come up with a way of encouraging commuters to donate to charity using the Oyster cards, now carried by most London commuters.

Helen Parry and Stuart Kench's scheme, entitled Donate at the Gate, would give passengers leaving tube stations a choice of exiting through the normal barriers or opting for a special multi-coloured gate. Swiping their Oyster cards through this alternative gate would lead to an extra penny being deducted, which would go to a selected charity.

"If just 10 per cent of tube users donated through the gate, it could raise around £1.2 million each year," 22-year- old graphic design student Helen, from Putney in London, said. "The nominated charity could be changed each month, each week, or even overnight if there was a sudden disaster. Or the donations could be made site-specific so the money went to a charity that operated in the vicinity of particular tube stations."

Fellow student Stuart, also 22, who is studying graphic design and photography, explained that they watched charity fundraisers interviewing people in the street and asking them for donations. "Two things were clear straight away," he said. "Most people didn't like being approached in this way and even fewer were happy to hand over their credit card details in a public place.

"The fundraisers themselves told us it was important to target places where there were high volumes of people. That made us think of tube and train stations because we spend a lot of time travelling from Kingston to design studios in east London and know how busy it can get," the young designer, from Chipping Norton, in Oxfordshire, said. 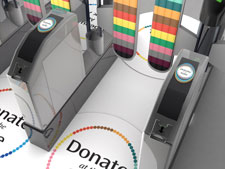 The students designed clear, colourful signs which would highlight the presence of the special gates. They also envisaged that local papers and advertisements on the tube trains themselves could be used to publicise what the current nominated charity was.

"Helen and Stuart spotted an opportunity to use design to improve society," said senior lecturer in Graphic Design Marion Morrison. "Most people would agree that we could all donate more money to charity - but we have little time to pause and drop our coins into the collection tub or fill out the direct debit. This is the work we strive for on the Kingston Graphic Design course, - meaningful, memorable and idea-oriented."

The idea - and the brightly coloured visual images that Stuart and Helen have produced to promote it - have already attracted plaudits, most notably a prestigious Royal Society of Arts Student Design award. "'Donate at the Gate' is an ingenious solution to making it easier and faster for people to donate to charity in a way that fits into their daily lives without much disruption," the RSA's senior developer in design education, Sevra Davis, said. "Stuart and Helen's well-designed brand and their understanding of the importance of instant gratification for donors demonstrate that they are talented young designers."

Helen and Stuart were not the only Kingston students to be recognised by the Society. Paul Bailey and Russell Hendrie also won one of the main awards for coming up with an iPad application which enables newspaper readers to 'flip' directly to a charity's website. "Paul and Russell designed an application that ultimately has the ability to literally rewrite the headlines through people's actions and donations," said Ms Davis.

Thirza Prentice and Hannah Whittaker were highly commended for 'Sweep the Pennies', a scheme which would enable people to donate small sums to a favourite charity whenever they log on to their online bank accounts with a single mouse click.