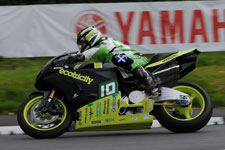 Good things come in threes and three has certainly been a lucky number for senior lecturer Paul Brandon and his team of student engineers this year.

On their third attempt in the race for zero emissions bikes (one of the categories in the Isle of Man TT competition series), the University's bike took bronze in this year's competition. "In three years we have progressed from a 'did not finish' to third place," Mr Brandon said. "It was also great to see our rider - George Spence - get his first ever podium spot at the TT."

The race for electric bikes is now in its third year and is becoming an important part of the Isle of Man TT competition, with prestige, trophies and high-stakes prize money attached. 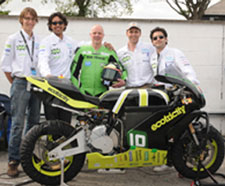 "Our 2011 bike had been designed specifically for the Isle of Man TT course and is the result of thousands of hours of work from the team which included three students Colin Barron, Denis Brossard and Simon Foote," Mr Brandon explained. "It was designed with a bespoke chassis and rear suspension built for one purpose - to win the TT Zero race while averaging more than 100mph. It is also truly a zero emissions vehicle as it is powered entirely by electricity generated from the wind farms of the team's title sponsor - Ecotricity."

Colin Barron, a second year motorcycle engineering student, said: "Working on the bike took up most of my life from January onwards. Although the design work went towards my coursework the practical build was mostly extra-curricular time. It didn't matter, though, because working on the bike was a really special project. If I wasn't actually in a lecture or had an immediate deadline you could guarantee you'd find me in the lab working on the bike."

"Going over to the Isle of Man for the TT was probably the best two weeks of my life!" Colin added. "At the event itself we were right up against the pit lane. I'm mad on motorcycles and was thrilled when I was asked to go along but even I hadn't realised what a big deal it was until I was there. My Dad had an idea though - he told me 'You're going to biking mecca'! Winning third place was fantastic but watching George come in faster than anyone else in the race was just out of this world."

Frustratingly, the bike's dashboard display failed just before the start of the race, so Mr Spence was forced to compete without knowing quite how much battery power he had left. "It's critical that the display shows the rider the information he needs to enable him to push the bike to its limit but to still have enough energy left in the batteries to finish the race," Mr Brandon said. "We quickly connected a digital volt meter and taped this to the bike with a set of voltages that would at least give George some idea of the battery capacity he had - it was not ideal but that's the nature of racing - you have to just adapt." 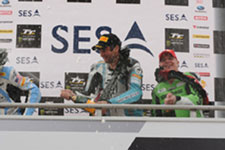 As it was, when George finally came in a triumphant third at 127mph across the finish line (15mph faster than the next quickest bike), the Kingston crew ran to the winner's enclosure to congratulate him, only to discover he still had 25 per cent power left in the batteries.

"This meant that if we hadn't had the dash problem George could have clocked up the same times as the bikes which came in first and second which is a bit frustrating, but it's very encouraging to know that the bike can perform to its design specification," Mr Brandon said. "The Americans realise we are a real threat now - we are far and away the quickest university and are a force to be reckoned with. We owe a huge thank you to everyone involved who made this possible.  It was a real team effort and a fantastic finish to the season."