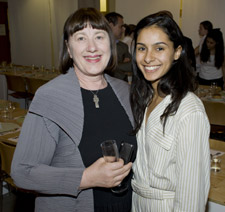 Kingston University has cooked up a tasty event celebrating the best of British - and the contribution made to the United Kingdom's culture, and gastronomy, by refugees fleeing conflict and oppression.

The University, in south west London, hosted a supper at which five traditional British dishes incorporating ingredients from the capital's largest refugee communities were served up. For example, guests tucked into a starter of Scotch egg, served with a Sri Lankan sambal sauce, while the meal was rounded off with a dessert of rice pudding cooked with raisins and saffron, ingredients that are used in Afghan cooking.

"What we are trying to highlight is that many designs that we think of as quintessentially British, such as the Mini Cooper or the buildings on the South Bank, were, in fact, shaped by people who came to this country as refugees," course leader of Kingston's MA in Curating Contemporary Culture, Professor Catherine McDermott, said. "The dinner - and our accompanying display stands - highlight the ideas of Jews, Huguenots, east African Asians, dissidents from eastern Europe and many others who brought distinct talents from their homeland that have enriched our city."

The Mini was designed by Alec Issigonis, who fled from Turkey, while Peter Moro, who escaped from Nazi Germany, was the chief architect of the Queen Elizabeth Hall, a building largely constructed by World War II Polish refugees. 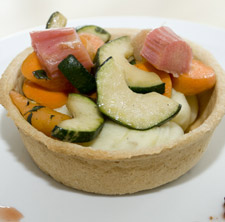 The main course was a Woolton Pie, a recipe produced for the British public by the government during the Second World War and named after Lord Woolton, the Minister of Food. The main fillings are potatoes, cauliflowers, carrots and swedes, all foods that could be grown at home at a time when imported food was rationed. Arabeschi Di Latte has made the dish more flavoursome by adding rhubarb, which grows plentifully in Kurdistan.

The supper on June 30 was held in the Church of St Mary the Virgin in Putney in London, which has been a forum for radical debate since the Cromwellian era. On the preceding Sunday (June 26) the University invited children aged 6-11 to a free jam-making session, where they got the chance to create their own jam using ingredients from the five refugee communities. Proceeds from the supper will go to the Refugee Council.

The MA, thought to be the only course of its kind in the United Kingdom, celebrates its 10th birthday this year. It is run by Kingston University in conjunction with the Design Museum and also has partnerships with the British Council, the Architecture Foundation, the British Museum, the V&A and the China Academy of Arts in Shanghai. Several former students have set up their own curating practices including Double Decker, JJAM and Haptic Thought, run by Ariana Mouyiaris who has organised the anniversary dinner.

"We wanted to take the opportunity offered by this anniversary to say that refugees have had a hugely positive impact on London's cultural life and will continue to do so," Professor McDermott explained. "As well as serving up an enjoyable meal, we showcased specially created design elements by contemporary UK-based designers that historically link refugees with highpoints of British design."