Strings on screen - Arditti Quartet reveals tricks of the trade 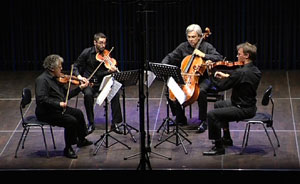 A Kingston University music expert has gone behind the scenes with a world-renowned string quartet to reveal the secrets of how they work their magic on brand new compositions.

Dr Paul Archbold, a reader in the music department, has been working closely with the Arditti Quartet for the past three years. The quartet enjoys a worldwide reputation for their interpretations of contemporary and 20th Century music. New music has been their specialism since they formed in 1974. Now composers and audiences have come to expect brilliant renditions of the latest compositions. Dr Archbold's documentary is aimed at demystifying the process involved in preparing a complex new piece of music for performance.

The new work, String Quartet No. 6 by the British composer Brian Ferneyhough, received its world premiere at the annual Donaueschingen Festival in Germany last October. In the weeks leading up to the performance, a camera crew followed the quartet and documented their rehearsals in London, Freiburg and Donaueschingen. The resulting film, called Climbing a Mountain, in recognition of the technical challenges presented by the music, offers fresh insights into their working methods.

"It is an unashamedly specialist film designed to help composers and music students understand the rehearsal process, from notation to performance," Dr Archbold said. "That doesn't mean that other people are excluded from watching and enjoying it, but its main focus is to show what professional musicians do when preparing a complex new work." The film traces the process of putting the performance together through a series of conversations between the quartet and the composer, Dr Archbold added. "It goes through the process chronologically, from the first look at the score to the final rehearsals."

The ensemble has a long history of close collaboration with composers, which its members believe is vital to the process of interpreting the new music which they relish performing.

"The idea of the film is to show exactly how a quartet functions," Dr Archbold said. "There are very few groups in the performing arts which are as intimate as a string quartet. They spend a lot of time together and build very intense human relationships."

The documentary is available on DVD and for free on iTunes U, the worldwide iTunes site for university content, where it has already proved to be a very popular download. The project was funded jointly by Kingston University, the Ernst von Siemens Music Foundation, PALATINE  (the Higher Education Academy subject centre for music, drama and dance) and the University of London's Institute of Musical Research at the School of Advanced Study.

The film includes a complete performance of the work and extensive interviews with the leader of the quartet, Irvine Arditti, and with the composer Brian Ferneyhough.

"It also gives an insight Brian Ferneyhough's work, which is often seen as very complex and forbidding," Dr Archbold said. "I believe the DVD shows his humanity and generosity in working closely with musicians to achieve a definitive interpretation."