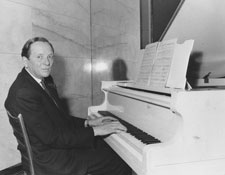 A collection documenting seven decades of musical showbusiness history has been donated to Kingston University. The archive details the work behind musicals that have graced the silver screen, Broadway and the West End by the late musical composer David Heneker who died in 2001.

Ivor Novello Award-winner Mr Heneker wrote songs for some of the longest-running musical comedies to be shown on the London stage after the war and was the first British writer to have two shows on Broadway running for more than 500 performances. He was best known for his musical Half a Sixpence, which was the last West End show to transfer to New York before Andrew Lloyd Webber's shows in the late 1970s and early 1980s. 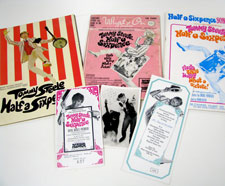 Starring British pop star Tommy Steele, Half a Sixpence tells the story of orphan Arthur Kipps, who is propelled into the upper classes after inheriting money from his long-lost grandfather. The musical ran in the West End in 1963, Broadway in 1965 - featuring a young John Cleese, of Fawlty Towers fame - before being made into a film in 1967. Other highlights from Heneker's career, which ran from the 1930s to late 1990s, include Charlie Girl, Irma la Douche and Expresso Bongo, filmed with singer Cliff Richard.

The archive, housed in the University's Archives and Special Collections in the Learning Resources Centre at the Penrhyn Road campus, contains a wealth of original material on the stage and film productions including working notes, early drafts of scripts and manuscripts of songs. There are also programmes and musical memorabilia such as commemorative wedding albums and postcards connected to Half a Sixpence, after-show champagne supper party invitations and telegrams congratulating Heneker on the opening night. 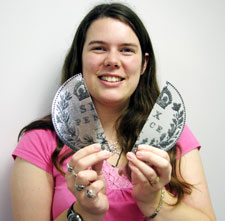 Kingston University archivist Katie Giles said the collection captured an important part of musical theatre history. "It illustrates the creative process of taking a show from its original concept to final production, demonstrating the planning and revision required to create a successful theatre performance," she said. "It also highlights how songs are composed and revised, and in some cases ultimately put aside while others go on to become well known. I've no doubt that many of our students, as well as external researchers, will find the collection a fascinating source of information."

A rummage through the archive shows early scripts for Half a Sixpence bear the headline 'Kipps', written in Heneker's ink fountain pen, after the lead character and title of H.G. Wells book on which it is based. The records also reveal how six songs originally written for the West End show did not make the final production. Meanwhile there were no musical scores for four songs which appeared including Flash Bang Whallop, one of the biggest hits from the musical, which was a last-minute addition. 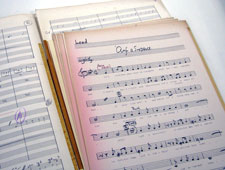 Other intriguing items in the collection include Heneker's Grammy-nomination plague from 1965, signed programmes by Steele and demo-recordings of early songs from the shows. The songs are currently on reels but in the future there are plans to transfer them on to cassette or DVD, bringing the sound of 1960s Broadway to life.

The collection joins a growing list of high-profile archive material held at Kingston University including Iris Murdoch's London and Oxford libraries and the Sheridan Morley Theatre Collection. This was one of the key factors for the Heneker family in choosing Kingston University to house the collection which had previously been packed away in the attic. "My grandfather's song-writing career covered such a long period of the music industry's history, from the 1930s to the 1990s and his songs are still much in demand today," David Heneker junior said. "We sincerely hope that this unique collection will now be readily available to all, students and enthusiasts alike. We are delighted that Kingston University has kindly agreed to catalogue and look after David W. Heneker's musical material."