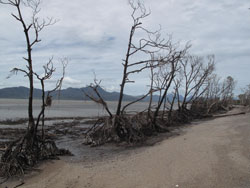 Disaster management students from Kingston University have witnessed first-hand the devastation caused by tropical Cyclone Yasi during a field course to some of the worst affected areas on Australia's North Queensland coast.

Ten final-year students on the London University's Environmental Hazards and Disaster Management BSc(Hons) spent a week surveying the area as part of the final stages of their course.

Cyclone Yasi struck south of Cairns in February with winds reaching up to 290km/h (181mph), ripping roofs off buildings and cutting power to at least 100,000 people.  The greatest damage was caused by a large storm surge which flooded and destroyed homes along stretches of the coastline.

The Kingston contingent investigated the havoc wreaked in Tully Heads in North Queensland, one of the most badly hit areas. "It was some of the worst devastation I have seen after a cyclone," field trip leader and course director Dr Neil Thomas said.  "In some of the places we visited, it looked as though a tsunami had gone through.  Some houses had literally been swept away, leaving only the building plot behind." 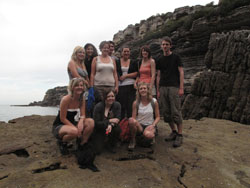 The month-long field course, being run for the fourth consecutive year, aims to consolidate what students have learned in the lecture theatre during the previous three years in a practical way.   "For the students, it's the culmination of everything they do in Kingston and gives them a chance to apply what they have learned to unfamiliar situations," Dr Thomas explained.

The trip started in Sydney, looking at the hazards that specifically affect the city and nearby coastal areas, such as severe storms, bush fires, tsunamis and coastal erosion, before moving on to North Queensland, where the cyclone hit earlier in the year.

"The devastation left by Yasi was shocking but enlightening," student Sophie Dusting, 21, from Worcester, who has just graduated with first class honours, said.  "It was a powerful reminder that these are not just images seen on television or pictures in the papers - cyclones actually occur and impact upon people's lives.  Seeing the effects for myself gave it all so much more meaning and gave me a greater understanding of how an event such as Yasi can devastate lives.  It also reinforced what potential we have with our degree to help those in such terrible circumstances." 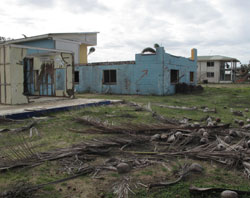 Students had the opportunity to do some work with the New South Wales Fire Brigade, who gave them an account of being among the first response teams to deal with the aftermath of the Japanese earthquake and mega-tsunami in March.  The students were also able to compare New South Wales' rural and urban fire-fighting procedures with those used by London Fire Brigade, with whom they had already spent time back in the United Kingdom.

"The way the trip has managed to change so many of my views of the world, society and life in general has been remarkable," student Daniel Young, 21, from Bath, said.  "The trip may only have lasted a matter of weeks, but it is an experience that will stay with me for the rest of my life."

Most of the students who travelled to Australia are keen to pursue careers in disaster management, such as emergency planning officer roles.  Dr Thomas said the field trip gave them invaluable hands-on experience.  "It's a fantastic learning environment and our external examiner described the field course as a real gem," he said.  "For me, the best thing is to see students using the skills they have developed over three years to address real practical problems in unfamiliar environments.  The way the Australian authorities handled Yasi was a masterclass in emergency management which is precisely why there were no deaths directly resulting from the cyclone."