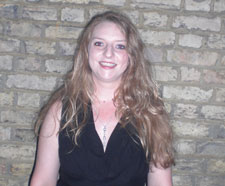 Lucy Macneill came to Kingston University after making a last minute decision to do an undergraduate degree in property planning and development - and enjoyed it so much she decided to stay on to study for a Masters.

Lucy, from Fleetwood in Lancashire, had been to university in her teens but didn't complete the course. She came to Kingston as a mature student, aged 27, after working on the management side of running nightclubs.

"Several things made me consider changing career," Lucy, from Fleetwood in Lancashire, explained. "Supermarkets selling cut-price drinks and the smoking ban, for example, both made me think the nightclub industry was set to go through a difficult patch. But I only made the decision to give university another try in June, so I had to apply through Clearing."

Lucy says she found ringing Kingston University's Clearing hotline surprisingly straight-forward. "I was worried how they'd react to the fact that I'd taken my A-levels nine years earlier but the person who answered my call was very helpful and it really didn't take very long at all. They accepted me to read property planning and development."

Lucy said the university - in south west London - provided a good environment for mature students. "There was one other on my course and several others in the School of Surveying. There was even someone who was studying for his degree at the same time his daughter was doing hers at another university. 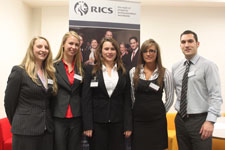 "In my first year, I lived in halls and there was a block set aside for mature students, so we'd go out as a group from time to time. But age was never an issue - I got on well with everyone." Lucy certainly made the most of her second crack at university. She won a Royal Institution of Chartered Surveyors (RICS) award, which was presented by the society's president at its London headquarters, and was selected to take part in an event called the European Challenge.

"It involved visiting Berlin and Copenhagen, in teams of six students, drawn from universities all over Europe," she explained. "I had a brilliant time, working with people who spoke different languages and had different abilities. They were a great group of people and I'm still in touch with some of them."

"The staff on my course at Kingston University were very supportive, accessible and open-minded," she said. "My first year was hard because I had to get back into the habit of studying but, from then on, I just loved the course.

"My favourite module was the one on sustainability which looked at the environmental and social aspects of planning. Kingston has always put a strong emphasis on sustainability and it's now becoming so important across the industry.

"Kingston was a great place to be a mature student. I had more life experience and so I was able to address topics in a different way, from a different perspective, compared to those who were at university for the first time."

At the end of her course, Lucy decided to focus on building surveying and to study for her Masters at Kingston. She is due to complete her MSc this summer. "There's no way I'd have done postgraduate study if I hadn't enjoyed myself so much as an undergraduate," she said. "Hopefully, I'll soon have two RICS-accredited qualifications, which will open up so many more opportunities for me."