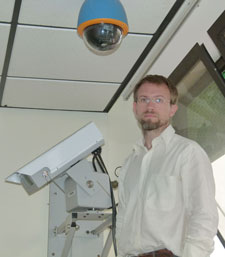 Techniques being developed by experts at London's Kingston University could play a leading role in helping to bring rioters and looters to justice in the future. Experts from the University's Digital Imaging Research Centre, are currently working on a project to help police and security staff analyse CCTV footage of incidents in town centres more speedily.

The Kingston team plans to develop components to automatically analyse multi-camera networks and footage before and after a trigger incident, such as a riot or fight, Dr James Orwell, who is leading the privacy-sensitive video surveillance project, said. "The technology would then produce a set of video segments relevant to a potential police investigation," he said. "For example, if a window was smashed and shop looted on a town centre street, the technology being developed would be able to track back to see who smashed the window and then retrace his steps to see when and where he entered the town centre."

The research aims to design technology to address two current problems with video surveillance: what should be archived and who should be able to access this data. The team will create techniques to identify when a potential incident, known as a trigger, occurs. Triggers could include riots, fights, loitering, suspicious behaviour around a shop or cash machine or left luggage in a public place. Once a trigger incident has been identified staff monitoring the systems could be alerted so they could analyse the footage.

The team will also devise techniques to automatically delete certain recorded data while information which is relevant from a security perspective will be retained. This will limit unnecessary data storage, protecting a citizens' rights to privacy, and make potentially important CCTV footage available to police, reducing the need to scour hours and hours of footage.

"A simple intruder-detection system could trigger the identification of all video data containing other observations of the intruder," Dr Orwell said. "This data could then be isolated into a secure archive, leaving everything else to be safely deleted."

Little research has been done on minimising the impact of video surveillance on privacy. This research will involve the design of alternative techniques which will work with current systems. These new methods will allow data to be indexed, stored and managed based on relevance which will prevent agents and security staff having to view irrelevant data, in turn reducing privacy infringement. They will also incorporate secure erasing of irrelevant data. It is hoped this will help to make video surveillance more acceptable in European society.

The project, funded by the European Commission, started on February 1 2011 and will last 36 months.