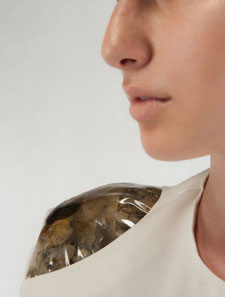 Mould - an ugly unwanted parasite and health hazard, growing on bread or in damp bathrooms? Or a versatile, attractive material just waiting to be seized upon by fashion designers?

Ninela Ivanova, an MA Fashion student at Kingston University in south west London, uses fungi as both an inspiration for her designs and as a material which she has incorporated in her latest collection - to be unveiled during London Fashion Week.

"Mould is extraordinary," Ninela, 24, said. "It thrives when nothing else can grow. It prospered in the aftermath of the Chernobyl disaster - it even grows on the outside of spaceships," added the designer, who was inspired by a Russian documentary about mould and by her interest in using natural materials.

Ninela has aimed to create delicate and feminine womenswear despite working with a material that might seem repellent. She has grown mould and then translated the patterns it forms on to chiffon drapes. She has also reproduced the patterns in silk and sealed them in close-fitting silicon garments, which cling tightly to the body like a second skin. And three of her looks actually incorporate the mould itself, sealed in PVC shoulder pads and a top, where it grows. 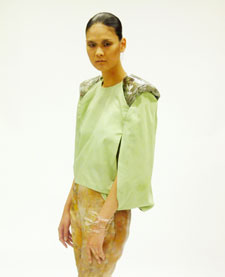 "I am playing with people's perceptions, twisting the viewpoint of ugly and turning it into something they will find beautiful," she explained.

During the past few years, researchers had found many new uses for fungi - for example as a medicine or a fuel and even as an insulating material in building, Ninela said. I want to show that something which most people consider quite horrible ­- and a symbol of death and decay - could actually create and heal."

Ninela grew up in Bulgaria and studied for her first degree in capital city Sofia. "A former student from my course went on to study at Kingston and she came back to give us a talk. I knew I wanted to study in London so I decided to look up the university. It turned out to be the perfect environment for me to try out my ideas. It was only when I came to Kingston that I got the chance to experiment with different ways of growing mould and transferring it onto garments," she said. 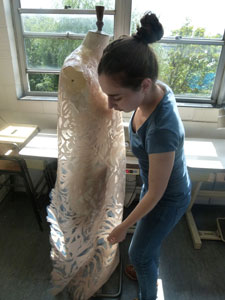 MA Fashion course director Nancy Tilbury said Ninela's work had flourished during the year she had spent at the University. "Our programme encourages designers with a thirst for fashion innovation to devise new ways to design for a world we can't even imagine," she said. "Ninela has taken full advantage of the freedom that the course offers to develop radical ideas - but her looks are also very beautiful in a traditional sense."

Ninela is now planning to continue her experiments by studying for a PhD at Kingston - and has strong views on the direction that fashion is heading. "We seem to be moving closer to machines rather than going back to nature and I want to change that through my design practice," she said.

"I envisage a future in which we will only have only one outfit that will change when you enter different environments or wish to project a different image. If your garment is living and transforming will you still need to buy the season's must-haves? Perhaps instead you could programme your clothing to suit your individuality?"

Ninela's collection will be showcased in Kingston University's Body Laboratory during London Fashion Week. The students' work can be seen at Vauxhall Fashion Scout, at Freemasons' Hall in Covent Garden, on September 16, between 5.00 and 8.30pm.