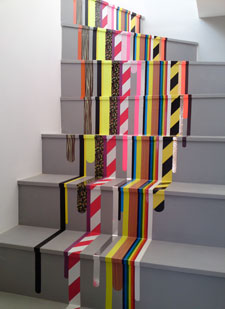 A Kingston University lecturer is set to see his designs appear on the side of 12 British Airways planes which will be flying athletes, guests and dignitaries to and from the London 2012 Olympic and Paralympic Games.  Pascal Anson has just won the airline's Great Britons competition - in which artists were challenged to capture the spirit of the games.

Anson, a senior lecturer at Kingston University in south west London, is keeping tight-lipped about how his planes are going to look but says there will be similarities with his previous works, which include decorating a staircase with multi-coloured insulating tape and covering a car with wood-effect laminate strips.

"The jump from transforming a car to transforming a plane is massive," he said. "I'm very excited about working on something so big. It feels like a dream job as the designs will remain on the planes for six years and be seen by thousands of people."

The competition judges included one of Britain's best-known artists, Tracey Emin, who will now become Pascal's mentor for the duration of the project. "Pascal presented a clear and concise idea that we all responded to immediately," she said. "If I saw this aircraft on the runway, I'd definitely want to be on it." 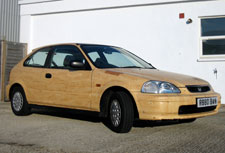 Anson and Emin have a tight timetable to work to as the planes will take to the skies in February, bedecked in the new liveries.

Anson teaches students on several courses at Kingston including graphic design, interior design and the University's art and design foundation course. "I hope this recognition will be a real inspiration to my students at Kingston - and will encourage them to seize every opportunity that comes their way," he added. "Making a living as an artist or designer can be tough, but this just shows what you can achieve if you apply yourself and use your imagination."

Before boarding one of Pascal's planes, passengers will be able to view paintings by a Kingston University alumnus, Will Rochfort. Work by the fine art graduate will be included in the Art of the Olympics and Paralympic Sports exhibition at Heathrow's Terminal Five.

- Find out more about Kingston University's art and design courses.