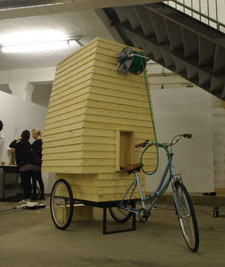 The idea of designing a shower cubicle mounted on the back of a bicycle might seem eccentric to many in the west. But Kingston University MA design student Chen Ying Gao hopes it might be able to offer some much-needed comfort for some of China's impoverished migrant workers.

During the past 30 years, an estimated 145 million rural people have moved into China's main cities to work in factories or on building sites. Many live in cramped workplace dormitories or shacks without any washing facilities.

"In this environment basic personal hygiene is almost impossible," Chen Ying explained. "Even building a simple shower room is impossible - because space is at such a premium."

The 27 year old got to see these conditions, close-up when she studied architecture in her home city of Beijing.  After landing a place to study MA Design: Product and Space at Kingston, she decided her major project would be based on the migrant workers and went to speak to some of them.

"It wasn't easy," she said, "because most of them came from a long way away, from the far north of China or the south. Some were surprised I wanted to talk to them and some of them really didn't want to tell me their stories." 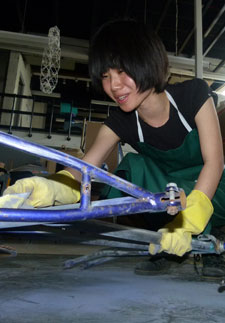 Chen Ying came up with the idea of a portable shower cubicle which could be simply assembled from wood and then mounted on the back of one of the rickshaws which are a common sight in Chinese cities. The rickshaw rider would not carry water, that would be supplied by employers - and even by the migrants themselves.

"I noticed that most of the workers carried flasks of hot water which they use to make tea. They are easy to buy and fairly inexpensive," Chen Ying explained. "I've designed the shower unit so that cold water from a pipe and hot water from the flask are fed through a mixing valve. The water temperature can be controlled by increasing or decreasing the flow from the cold water pipe. It means you can have a nice warm shower without using electricity or gas."

Assembling the design was a challenging task. Unlike in Beijing, it wasn't easy to get hold of a rickshaw in London, so Chen Ying had to saw a bicycle in half and reassemble it, adding a large base to support the shower and an extra wheel.

"I had to experiment a bit to get the weight balance right. It meant I got through four bicycles in total," Chen Ying said. She is a keen cyclist herself but says she's not planning to ride the rick-shower through London. "In order to move it easily in and out of our studios, I've designed the prototype so that it comes apart in the middle. It's probably not yet ready for the streets." 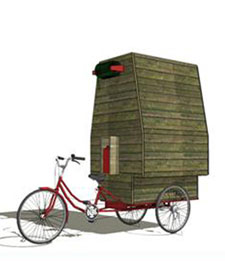 Course director of MA Design: Product and Space, Colin Holden, said Chen Ying had taken on a very big issue. "Sensibly, instead of trying to solve it, she has focused on a single detail to make the lives of migrant workers marginally less severe - the provision of basic bathing space," he said.  "This mobile service also provides an alternative employment possibility.  I hope she takes it to the next level back home in Beijing - it's a project with life beyond the duration of the MA."

After completing her MA, Chen Ying plans to return to China - and says she is already working on new designs to benefit people in her homeland. Her design, and work by other students on the course, will form part of Kingston University's display at Tent 2011 at the Truman Brewery in London's Brick Lane from September 22-25 during the London Design festival.